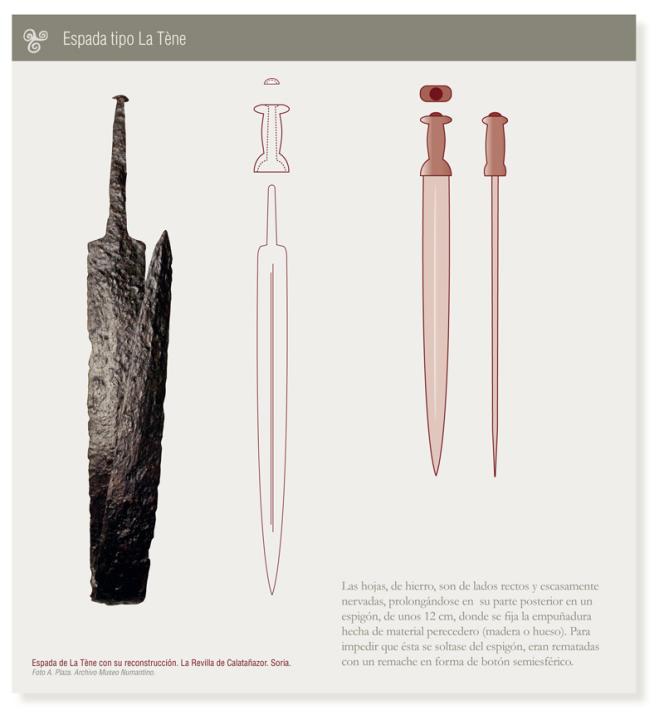 "The inhabitants were excellent riders and infantry (...) caused major problems to the Romans for their courage" (Appian, Iber. 76)

The continuing war situation had Celtiberia because the necessity of booty and based on the idiosyncrasies of the inhabitants, especially focusing on stock theft, war as a means of acquiring prestige and wealth. War and death with honor. the importance of the war to gain prestige and wealth, agonistic ethics linked to it, the single combats are shown on the weight of the military, as reflected in the iconography of ceramic representations. The Celtiberians "executed their dances with the usual movements of arms and bodies."

The technology of war, weapons and armor

And the value of the Celts and the bravery of their horses, the classic texts also emphasize the quality and effectiveness of their weapons. Several authors speak of the excellence of the forges Celtiberian, and around 250 BC, Philo praised Hispanic weapons. Diodorus relates how they were buried in the first stage of manufacture for, by hammering, to be eliminated after the rust produced, Justin and Marcial consider the importance of quenching the steel in the cold waters of the rivers Chalibs, Salo and Bilbilis, to secure final result.

Military equipment we know by the grave goods found in the tombs and iconographic representations on ceramics and coins. The necropolis to an understanding of changes in weaponry and technology over the centuries. In this way you can know the team Numancia warrior and the weapons most frequently used. Are represented both offensive: swords, daggers and weapons horned, and defensive: shields, helmets and armor.

"The Celtiberians are very different from us in preparing the swords. Have an effective point and double cutting edge, so the Romans, leaving the sword of their parents, since the wars of Hannibal the change by the Iberians. And took their manufacture, but the goodness of iron and other details dedication have barely been able to imitate "(Suidas)

"The Celtiberians used a two-edged swords made of iron good ... They have a unique way of preparing ... buried iron sheets until the weaker party time consumed by the rust is removed from the hardest part, weapons manufactured and cut all As opposed to them, or shield or helmet, or bone resistance to shock the extraordinary hardness of iron "(Posidonius)

Polybius, referring to the year 216, highlights the main feature whereby celtiberica sword "could hurt the same edge that edge, while the Celts were used exclusively for the block, and this at a distance." According to Suidas, yet the year 225 the Romans used a short sword similar to the Greek, and it is known that, during the wars with Hannibal, impressed by the superior weaponry of the Carthaginians Hispanic mercenaries in his army had taken the sword Hispanic "hispaniensis gladius."

The different types of swords Celtiberian have been known through the excavations of the necropolis, so its name, largely responding to the ancient and modern locations associated with them. Also, some types, especially knives, are known by the distinguishing features of his grip.

Aguilar de Anguita type swords. These weapons are fully consistent in its formal detail of the decoration with copper wires embedded in the handles. More is known copies in the necropolis of Aguilar de Anguita, but also appear in Siguenza, Carabias, La Olmeda, Valdenovillos, Atienza, Alpanseque and the merchants.

Swords pediment, characterized by the termination of the handle in a semicircular shape. Alpanseque are known, Aguilar de Anguita, the merchants and Olmeda.

Atance type sword: Handle topped with antennas atrophied and grooves straight blade has a central beam finely shaved, bordering the two wide grooves. Reaches its peak in the necropolis of an advanced point.

Sword type Arcobriga: pistiliforme leaf and withered aerial handle, finely decorated with silver damascene wire. It is known mostly in the Plateau, in the area and in the necropolis celtiberica vetones who have contributed a large number of copies and the most sumptuous (siglos IV-III).

Swords of La Tene, of European origin, known mostly meseteñas pieces that mimic those of broader leaves and traversed by grooves

Pediment daggers, swords inspired by the same name, as those are characterized by the rim of the handle in a semicircular shape. Known in ancient times but after a thorough renovation will continue until the second century BC, with some specimens richly decorated in their grips and their sheaths. It is well known in the Western Plateau.

Biglobulares daggers or dobleglobulares: named for the double circles that decorate the handle. Weapons are more typically considered Celtiberian, lasting until full romanization, being both in settlements and in cemeteries.

The warrior outfits, displayed together on the sword and dagger, characteristics of the funerary bundles more evolved. This modification of the array along the third century BC, would lead to innovations in melee fighting, probably related to the use of the sword of La Tene and their differences in size and sharpness, they would need the complement of the dagger. In the presence of both sword and dagger in military equipment referred to Posidonius, indicating that the Celts used a two-edged swords and daggers of an inch long, which are served in the melee.

In both cemeteries and in villages, has recovered a large number of throwing iron spikes of different shapes and sizes. The most common are the spear and javelin. We know them by their durable parts, ie the tip or metal spikes that have been preserved, but without forgetting that the essential characteristic of this weapon is the spear, often made of ash, whose opposite ends, as a reinforcement, are felt the tip and the tip, which prevents wear and balances the weight.

Foliaceous tips were attached to a pole, through the hollow cone or cube of the base where the timber was stuffed. Its length ranges from 13-20 cm in some javelins, to 60 cm in some spears. These weapons would be used by both cavalry and infantry, each man may include one or more of these weapons.

We also have examples of long thin rods of iron, topped by small points, based on a cube to set or pressing the wooden pole, which have been related to what they call falarica classical texts, which are sometimes confused pilum with Roman. Another variant weapon well documented in the tombs is the soliferrum that is, as its name suggests, a rod of iron, with lanceolate tip length of approximately 180 cm.

Strabo says the use of the sling between the Celts and are abundant in some deposits made with clay projectiles, such as where they are known Numancia numerous shells of mud, with an approximate weight of up to 30 grams and is similar to the glans of lead used by the Romans, although they dropped out early lead glans by the mud, more effective and economical light.

Initially thought that the mud was not biting the bullet, but the incendiary, the speaker Cease Gallic Wars. Taracena related this incendiary projectile balls of clay with badly cooked and the size of a fist, pierced with holes, which might serve to hold the tow with pitch or resin and wrapped, which showed unmistakable signs of spots and scorched.

Posidonius says that "the Celts are armed, some with long shield Gallo, others with round shield," the latter type, made of leather or wood with metal beak, is best known, which the Latins called caetra. It was used by both infants and by the cavalry and shipped usually hung on the body.

His performances of this type of shield are numerous Numantian ceramics. Its size could be less than two feet mentioned by Strabo, although some specimens represented in Numancia vessels could reach this size, around 50 cm in diameter. Lara contrails and caetra Clunia show that the riders was significantly higher. Umbo almost always had to take cash and sometimes it seems that might be pregnant, but wielded.

There was a variety of concave caetra abroad, but usually between the Celts is to be convex, leather or wood, decorated with paintings and 5 to 10 millimeters thick, judging by the clips preserved. The march was suspended at the back by a strap across to the right shoulder, the chest, the left axial infants or hung on the front side of the horse riders.

Some of these shields were tiny, little bigger than a washcloth, to use wielded, suitable for the melee, and fencing very fast useful to stop the beating enemies, as seen in some Clunia trails.

There are references of metal helmets and Poseidonio refers to a "bronze, adorned with scarlet crest, but we have few references, two of Celtic type represented in a glass of Numancia, ending in bifid jaws of a monster and movable crest, similar to that referred to in relation to Silius Uxama Italico. Other end in horns or figure of a rooster, painted in a oinochoe of Ocenilla, ending in a crest attic. In the ancient necropolis and Almaluez Alpanseque (Soria) appeared conical helmets shaped warhead and embossed decoration and a Aguilar de Anguita (Guadalajara) is made with two thin sheets of bronze attached to the top and fitted guardanucas and cheek, like a Corinthian helmet.

In the necropolis of Numancia is recognized remains of a Mediterranean town brass thin sheet that retains only part of a side-chin, hinged to the helmet by a hinge, similar to another almost complete, from Muriel de la Fuente ( Soria). This is an old model known as attic, by origin, but also called Samnite, which was adopted by the Romans from the fourth century BC, generalizing on the Italian Peninsula during the republican era and known in different places Europe. But most widespread type in an advanced point, used by the Romans, is the Montefortino, which is known copy of Quintana Redonda (Soria), associated with a hoard of coins BolsKan.

The few findings suggest that helmets most of the copies would be made on perishable materials, as follows from the appointment of Silius Italico examples regarding the use of leather by the Cantabrian, as well as that of Strabo, which indicates the rarity of metal hulls between the Lusitanian and carrying only a few types with three crests, while the other wore helmets made with nerves. In turn, referring to the peoples of the north said that not all were wearing helmets, but they used to wear long hair like women, even in the face combat girded with a ribbon. These data suggest that the hull, especially metals, as well as protection was a clear element of ostentation and prestige.

According to Strabo, "some wearing chain mail and helmets triple peak" and referring to the Lusitano, says: "most used armor made of linen and used very rarely, mesh," Horacio also mentions "iberae loricae." Have recovered remains of chain mail in the necropolis of outstanding variable Almaluez and must mention the bronze pectoral discs, assembled sets of strings, in the necropolis of Aguilar de Anguita and fragments in the town of Numancia. These were placed on resistant leather garments, as shown by some Iberian sculptural representations.

Other objects used in war

An instrument of war and in common use, own Celtiberia was the ceramic tube, of which there are eight complete copies and fifty Arevaci found in land. Appian speaks of the horn used by the army adamant, and the findings show that they were overwhelmed by horns in circumference and horn nozzle with a diameter between 15 and 25 inches, some of these speakers take the form of jaws of a monster, as the Gauls carnyx. Numancia remains were found in a double-ended tube mouth, single nozzle.

Livy speaks of standards and military standards, referring to the number of caught by the Romans in various battles: 62, 181 in Contrebia, 72 at the Battle of Mons Chaun (Moncayo), in the year 179, and 32 in year's action in the currency --- 175 C. Broths Colelius we recognize these standards, pending a rectangular horn as the Romans. 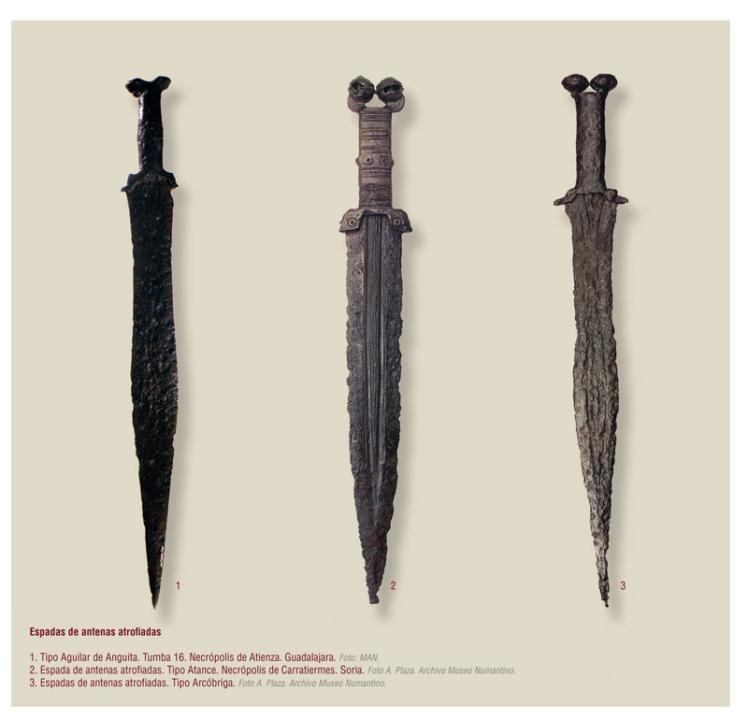 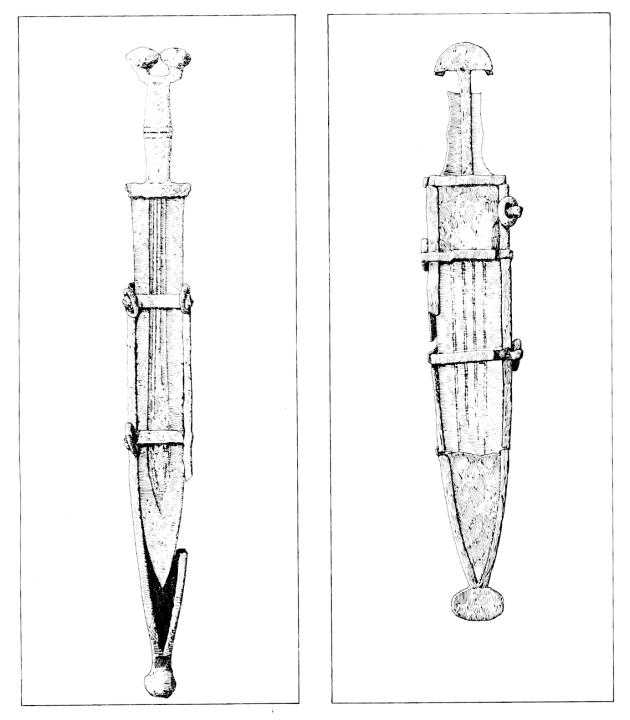 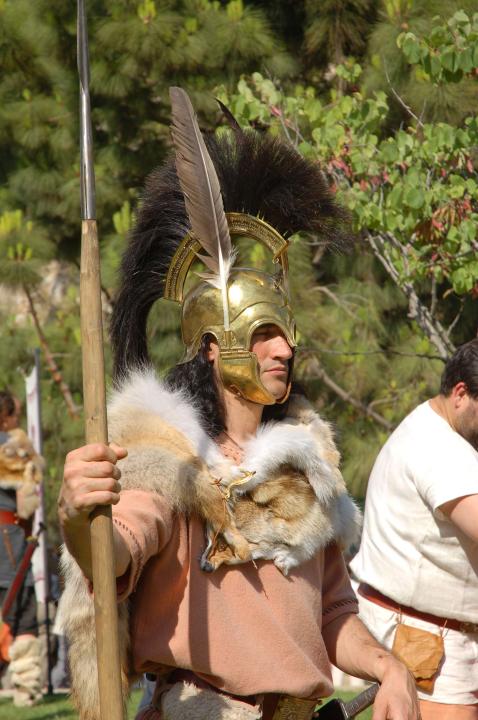 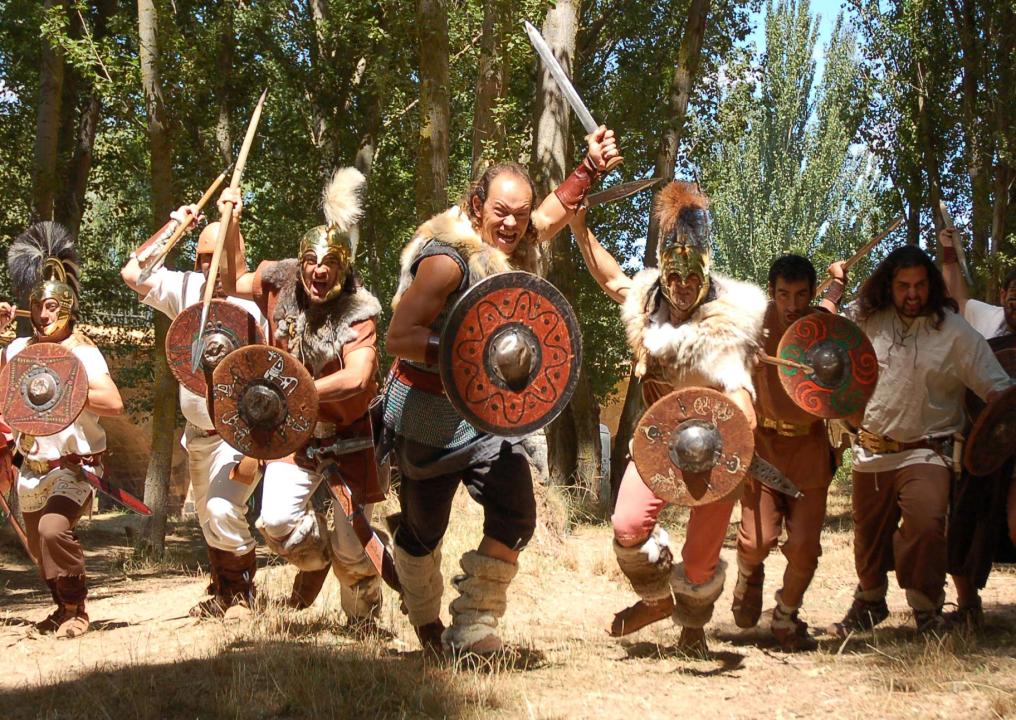 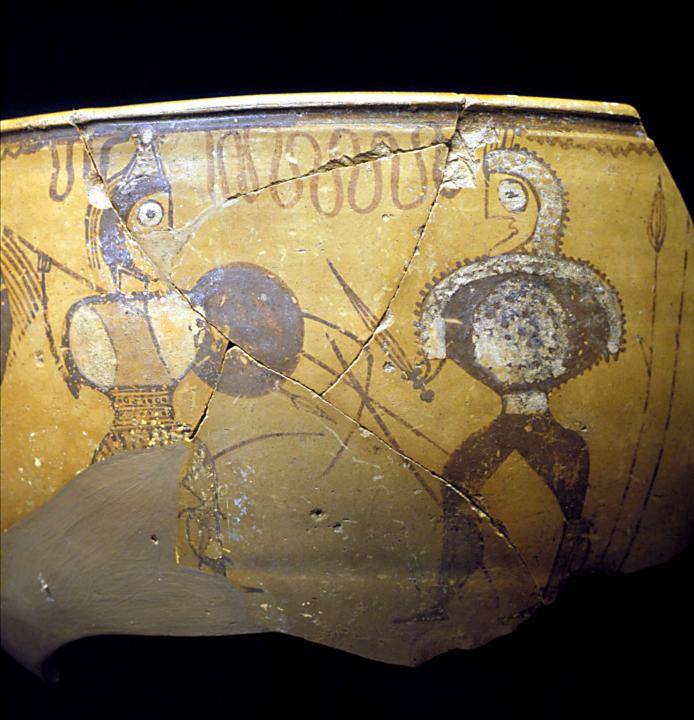