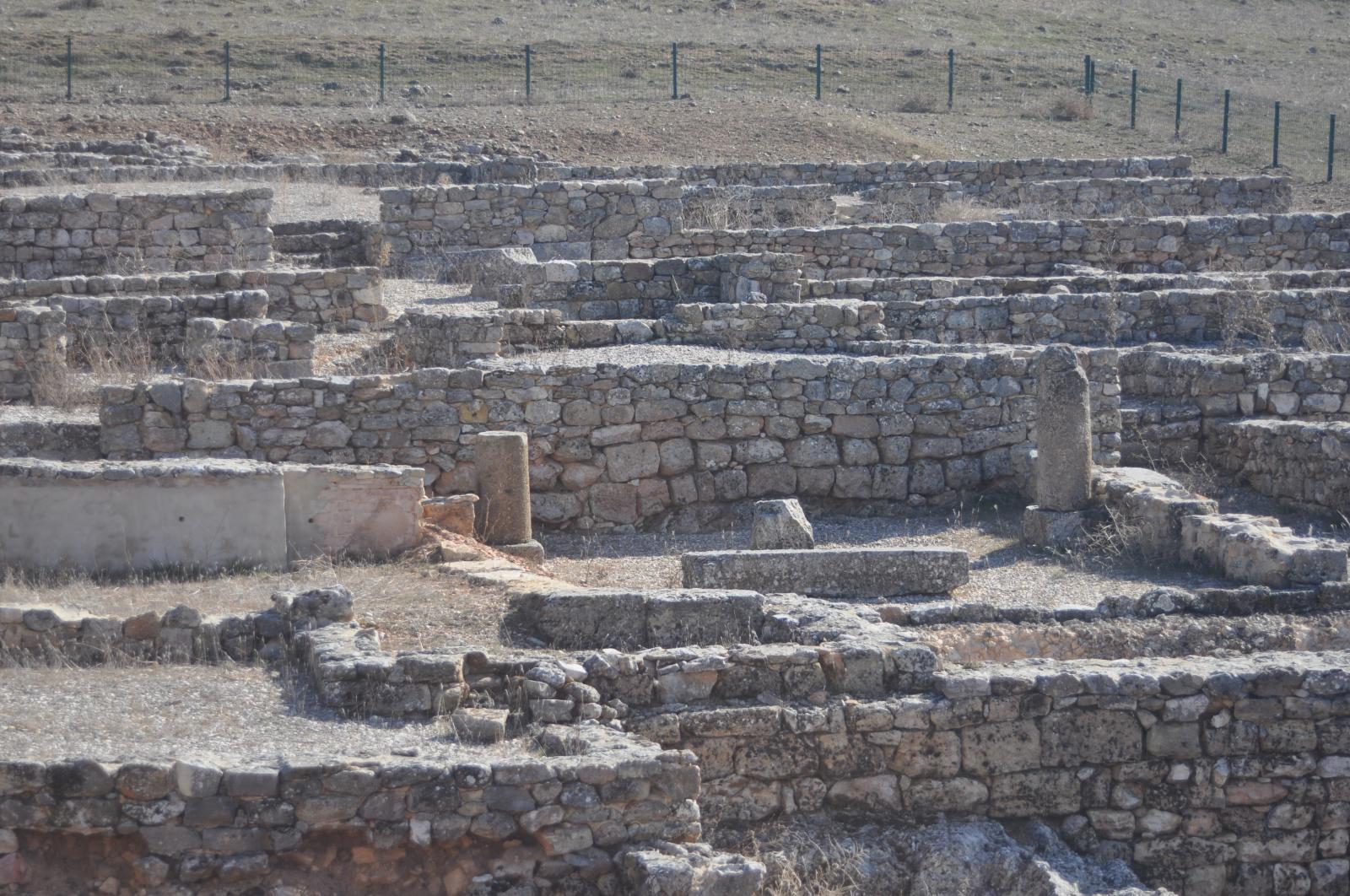 The hill of Castro, where he summoned the ancient city of Uxama, Osma is located above, on the road N-122 (Soria-Valladolid), about 58 km. Soria.

The view from the Atalaya-observatory

This Important Celtiberian-Roman city occupies the large hill of Castro, which protects the current Osma, and is identified in the landscape by the Islamic watchtower that stands on the rocky edge of the hill. This watchtower was part of a series of watchtowers which controlled the border between Muslims and Christians in the line of the Duero.

Now refurbished as a gazebo, is the basic point from which to contemplate not only the old city, but especially the surrounding landscape, with Osma as a direct descendant of the ancient Uxama and a little further, the vast fertile plains, where Seats El Burgo de Osma, crisscrossed by rivers Ucero and airplane, they have to break through, drawing deep gorges, before their marriage. One such cut is "La Hoz de Peñalavara" which opened the river as a huge Ucero natural door separates the Hill Holding Uxama the medieval castle of Osma, a reminder of the importance of this frontier town in the Middle Ages.

After his active participation in the Wars Cel (153-133 BC), is again cited, along with other cities Celtiberian, supporting the cause of Sertorius, being destroyed by Pompey (72 BC). Then in the third century mansion appears as reviewed by passing the Roman road, which has Caesaraugusta (Zaragoza) was going to Asturica (Astorga), the Douro Valley, located between Voluce (Calatañazor the environment) and Clunia (Peñalba de Castro, Burgos).

Visigothic still in the sixth century, the life of Uxama was fairly active, with their bishops at the head, to be signed from the 597, its assistance to the Councils of Toledo. In the eighth century Muslim conquest produces rapid, taking advantage of the old Roman road that connected with Uxama Termes (the road of Quinea the Song of the Cid), which led to its abandonment in stocking Osma 912.

The breed is known Uxama ancient texts, coins minted and cemeteries excavated, but there are no clear evidence in the city. The archaeological remains belong to the Roman city. that throughout the century, mostly from Tiberius, reached an important development reflected in urban sprawl and the emergence of some suburbs. It then gave the city an urban structure and important public buildings. At the end of Empire, the city is walled perimeter covering 28 hectares.

The center of the city, the forum or main plaza occupied the upper platform, strangled in the middle by a valley. The huge gaps between the top and sides necessitated a strong performance of terraces and fills, to allow the settlement of buildings and overlapping blocks of houses, adapted to the terrain and arranged in grid.

-The forum and its buildings:

This square centralized public buildings of the administration and the converged core or main street. The forum was rectangular, dominating and public buildings being visible from anywhere in the city. Excavations between 1975 and 1985, discovered an artificial platform or terrace, dated at mid-century, reinforced inside with buttresses holding the base of a porch-basement (cryptoportico) with warehouse functions, located under disappeared porch bordering the forum, in the center had placed the temple dedicated to the imperial cult.

Archaeological excavations have revealed a number of Roman houses, but now only be visited the denominator of the Bases (stone supports for the pillars of the porch of the street), which was excavated by Garcia Merino, since 1980. It was built during the reign of Emperor Claudius (years 41-54) and was inhabited with different corrections to the early third century.

Occupies a block bounded by two streets equipped with porches on the north and south. Has 950 m2 and Roman-type plant, with 20 rooms and an orchard or garden. Has its own tank in a colonnaded courtyard and a room with a cellar carved into the rock. It was decorated with beautiful frescos and has provided interesting examples of household items, including a large brass candlestick, a large iron brazier ceramic vessels in perfect condition.

Uxama had a series of tanks (have located more than 20) to capture, store and distribute water to the city. Part of this unique system for water supply, it is a large semicircular vaulted cistern, 32 ms. perimeter and 5 ms. high, divided into five interconnected compartments, with a capacity of 300 m3.

At the foot of the north side, you can see part of an underground aqueduct that brought water from the headwaters of Ucero, about 18 kms.

Uxama has an Archaeological Hall, which can be accessed at the beginning or end of the tour.

It is located in the old Hospital de San Agustin, El Burgo de Osma, and his visit is an essential complement of deposit Uxama, offering an attractive information of this city, through reproductions, recreation spaces, models, audiovisual and 3-D projections In addition, this class also explains, with the same educational resources, the medieval origins of Osma. 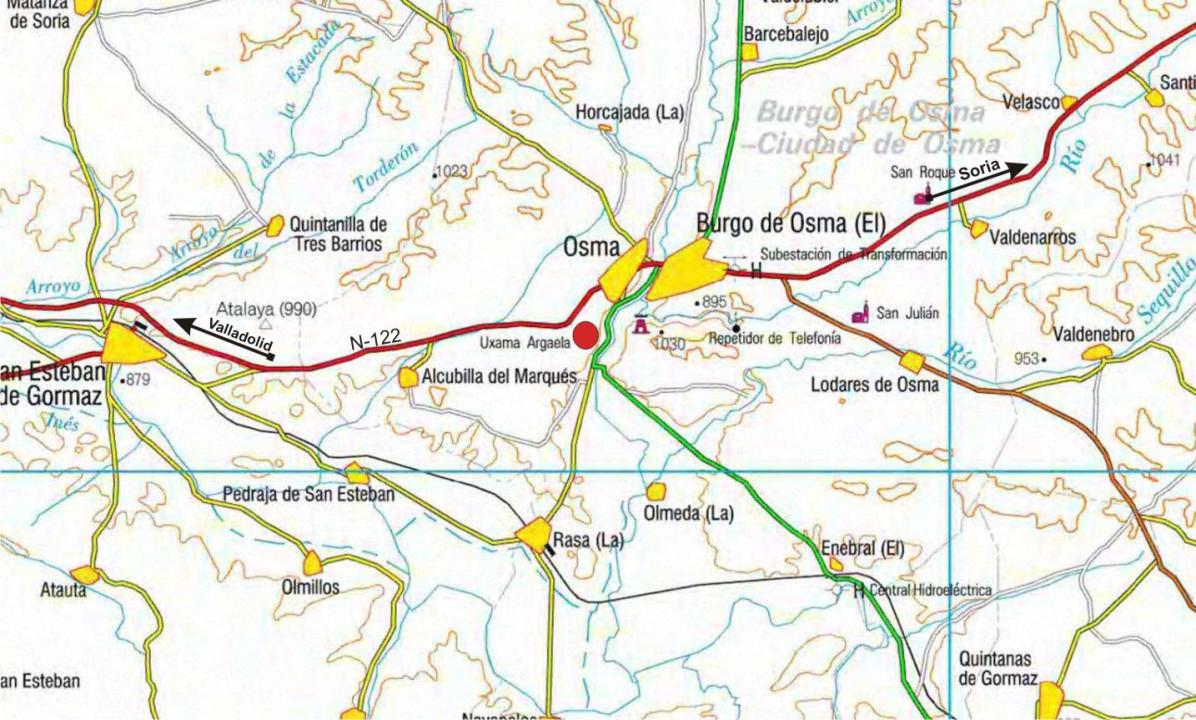 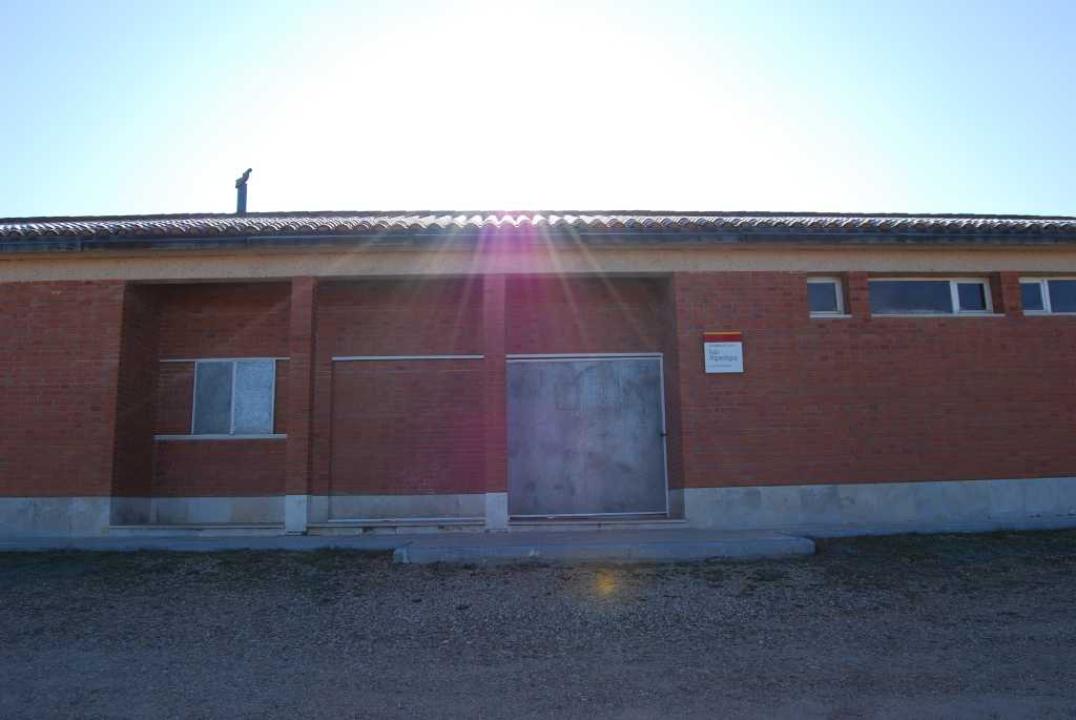 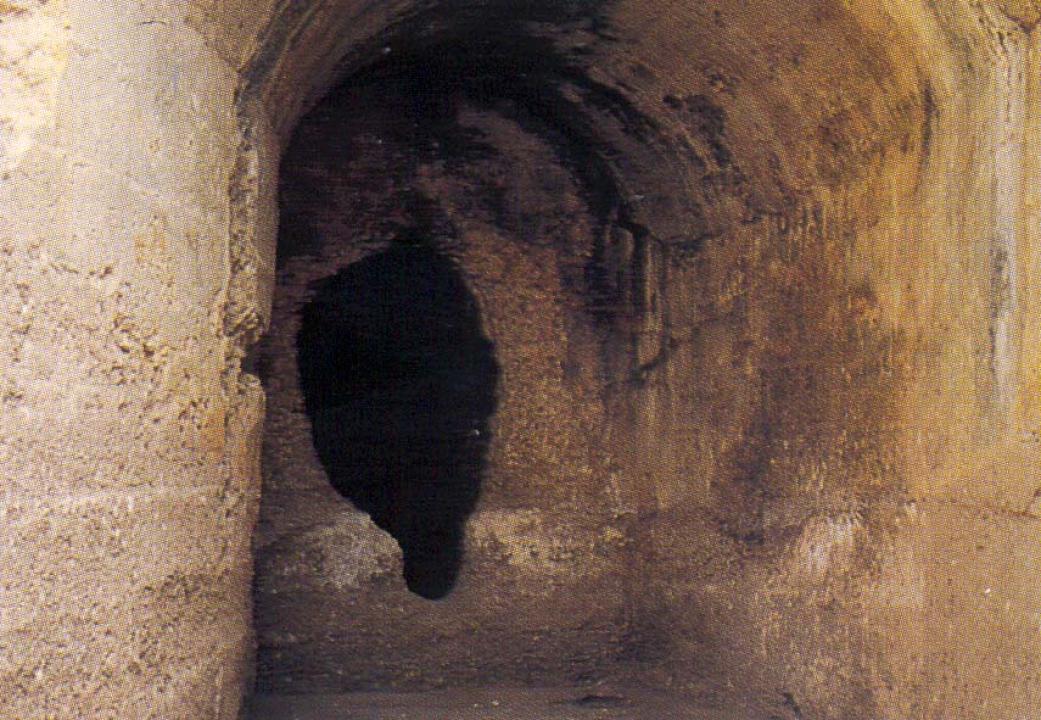 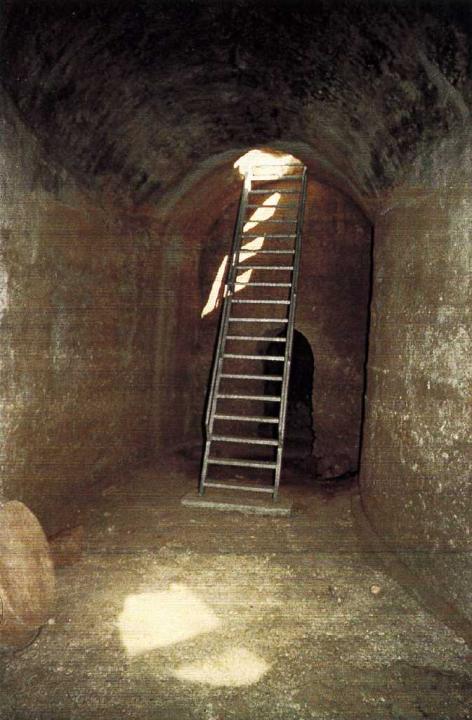 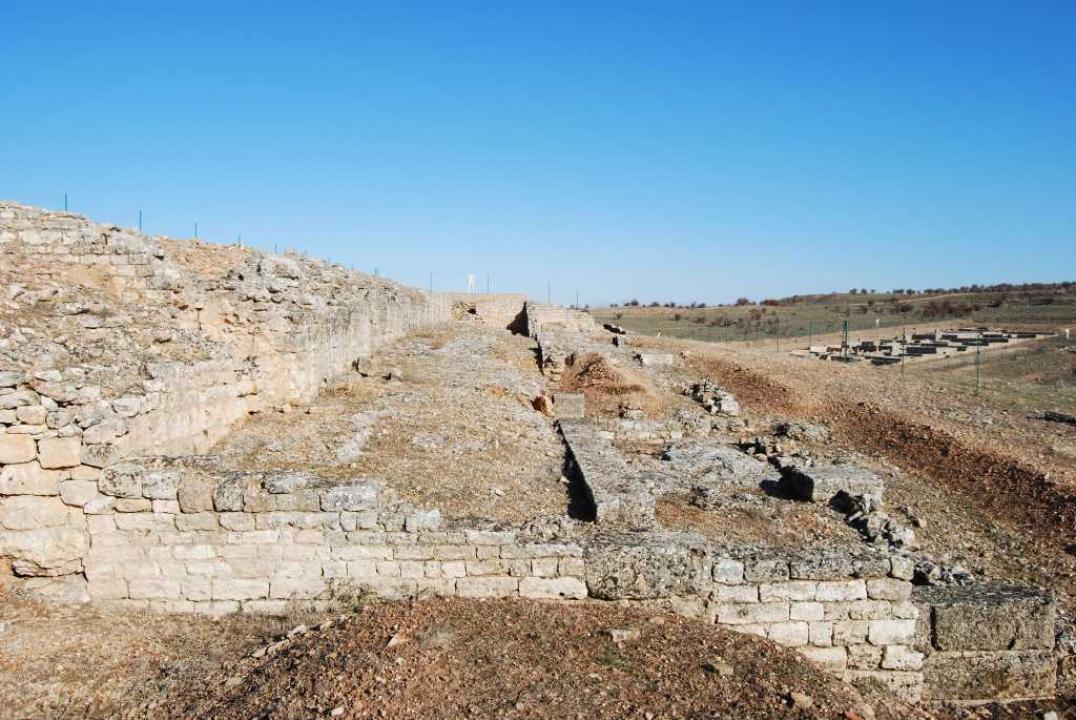 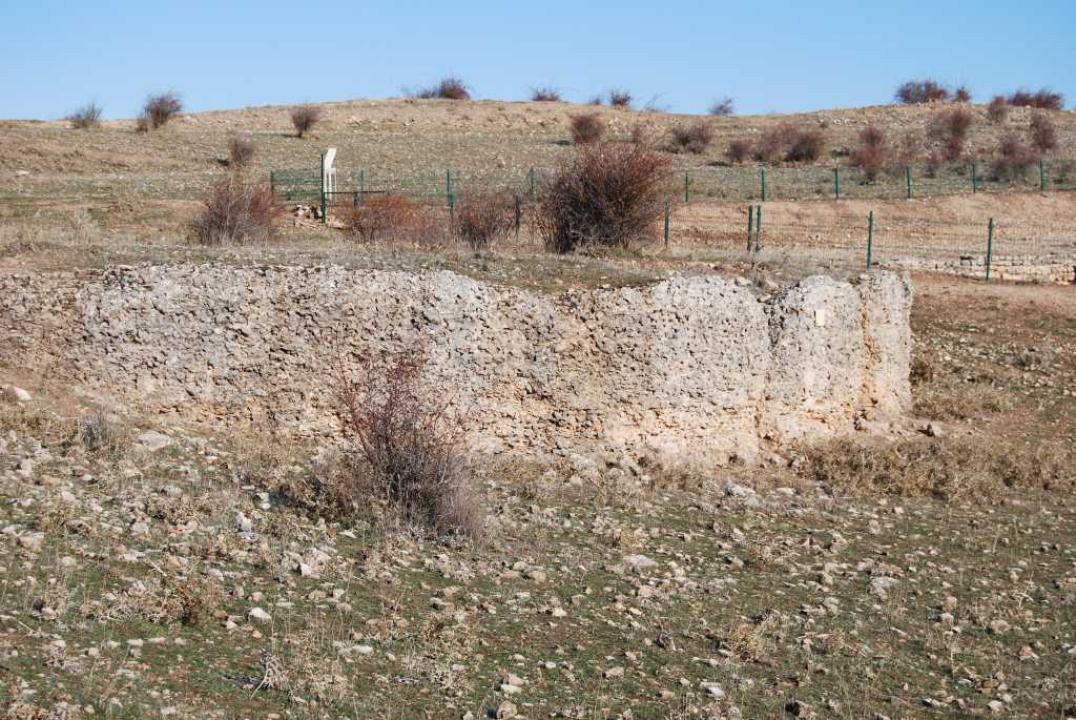 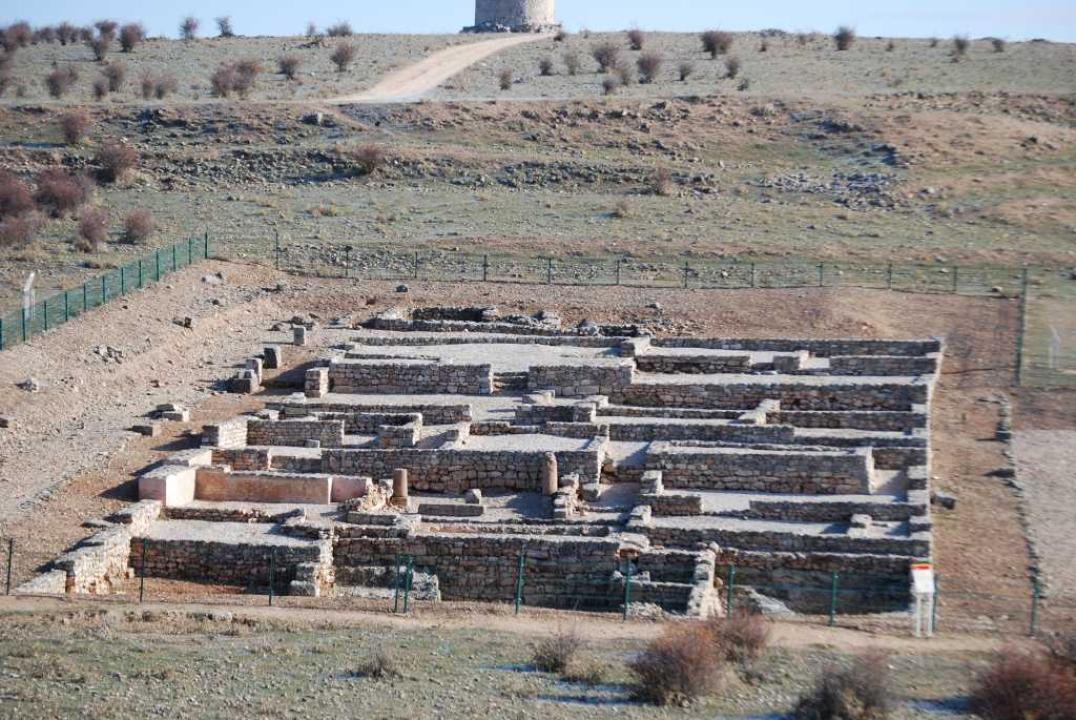 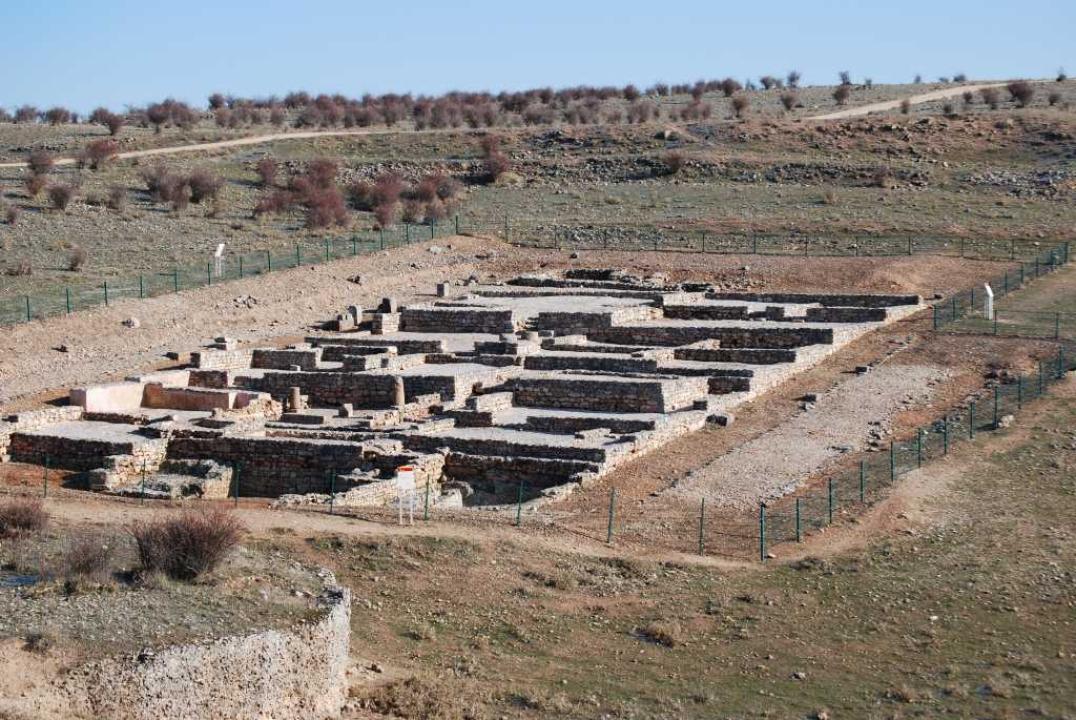 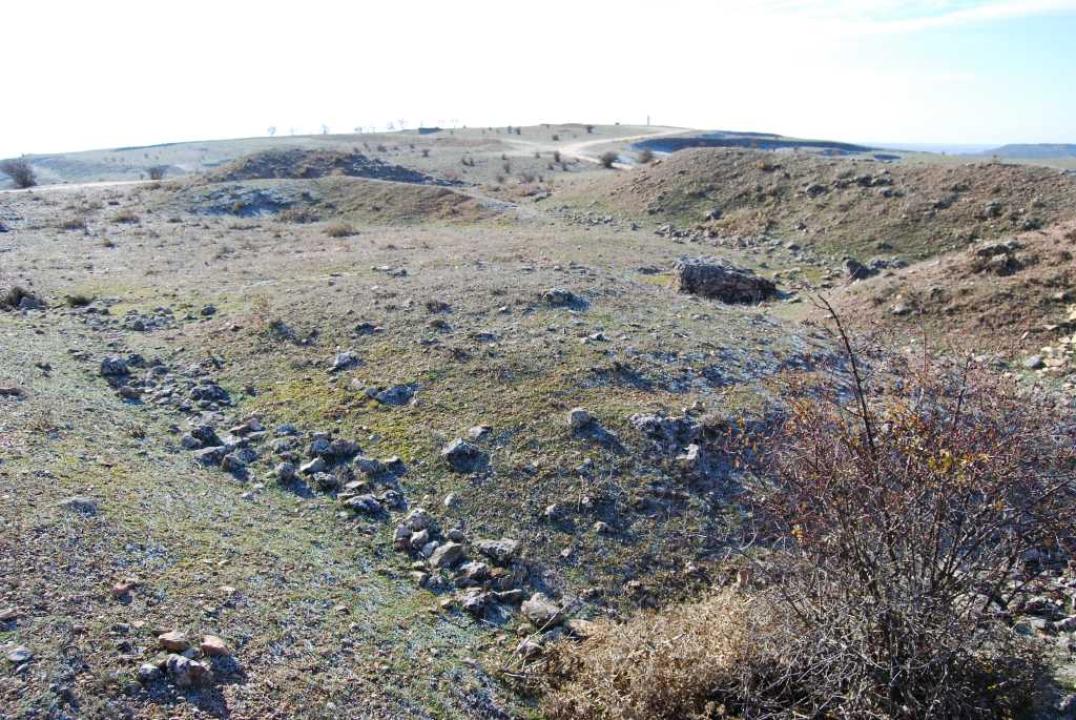 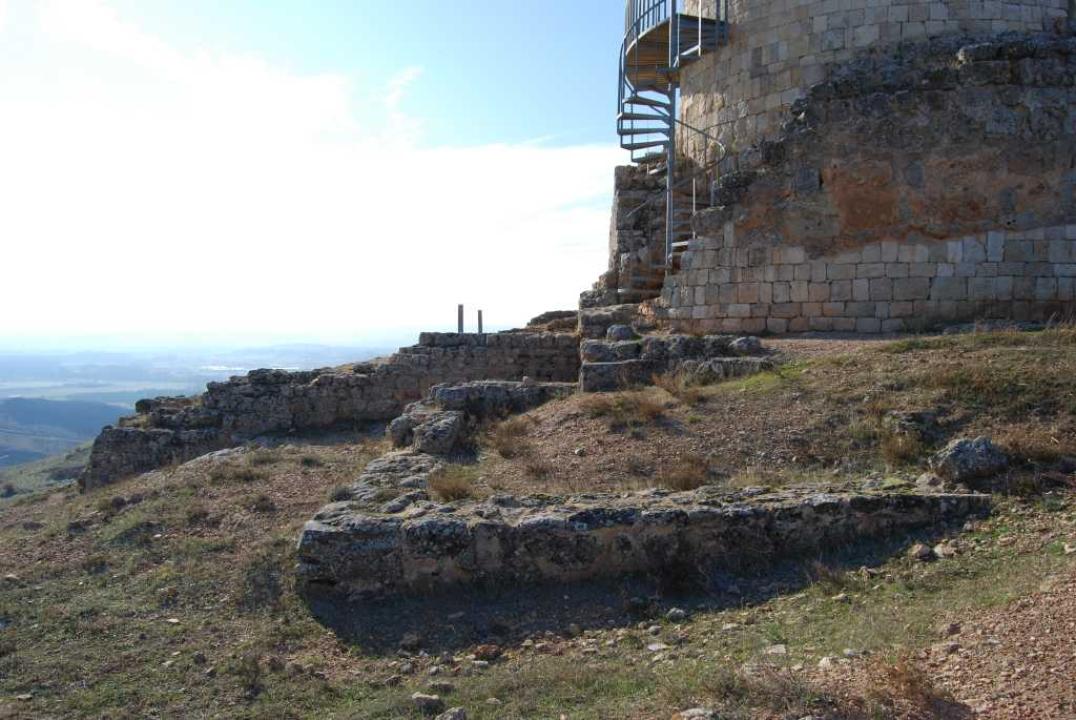 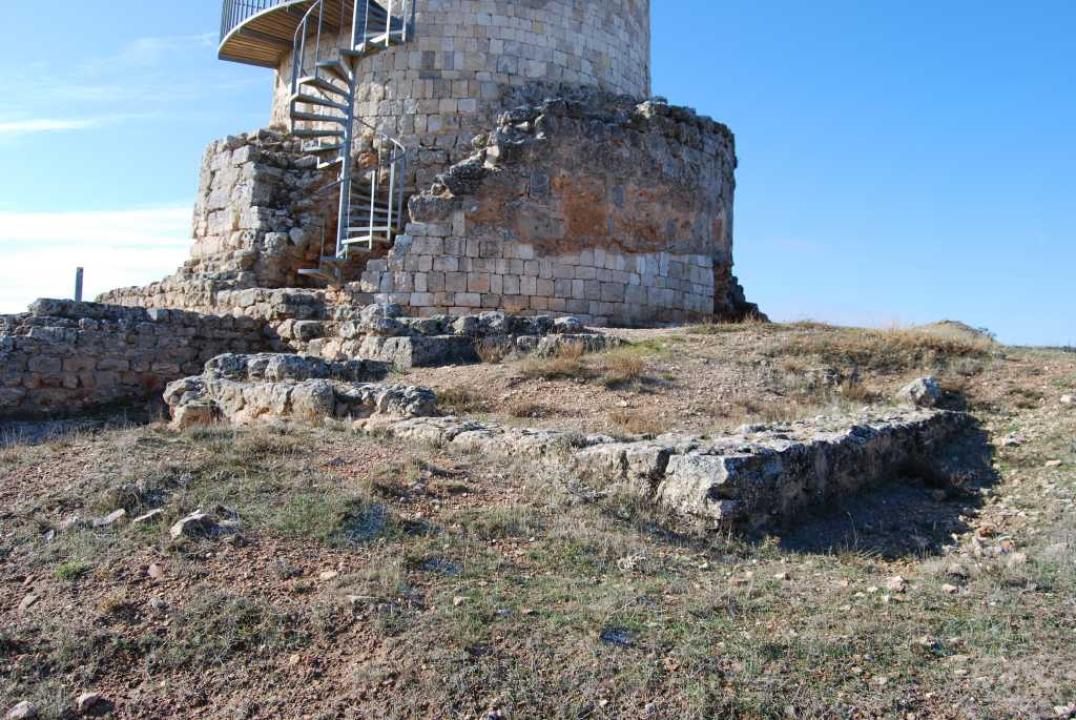 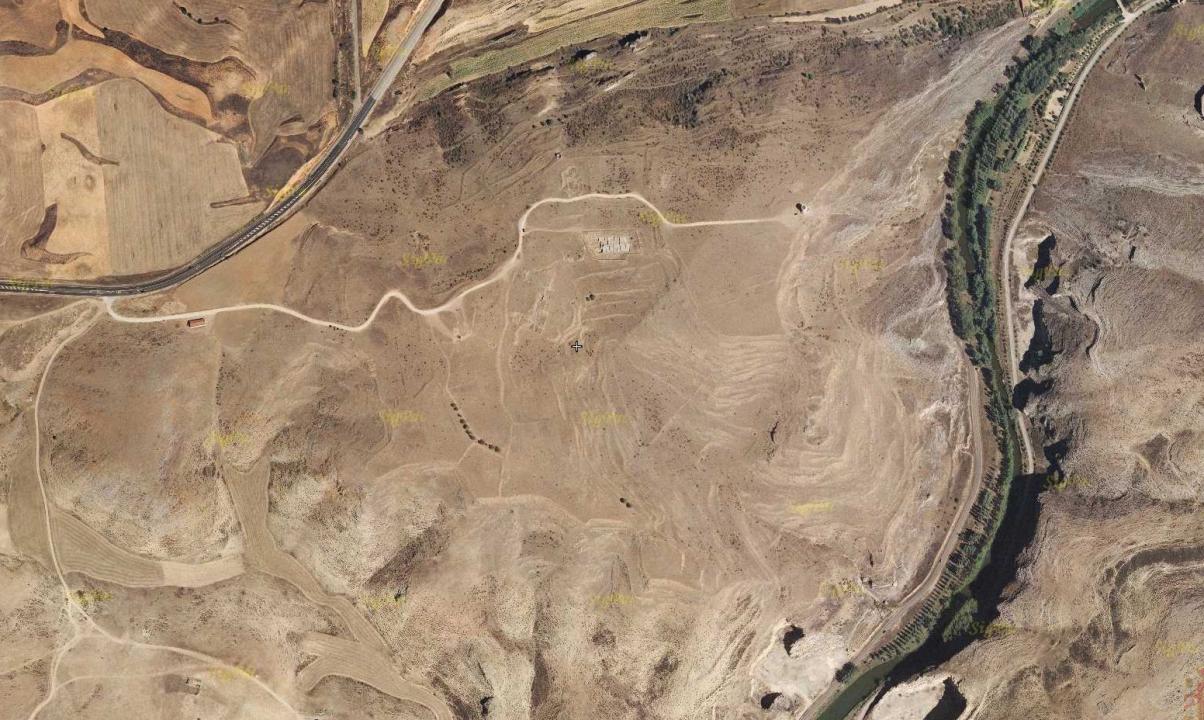 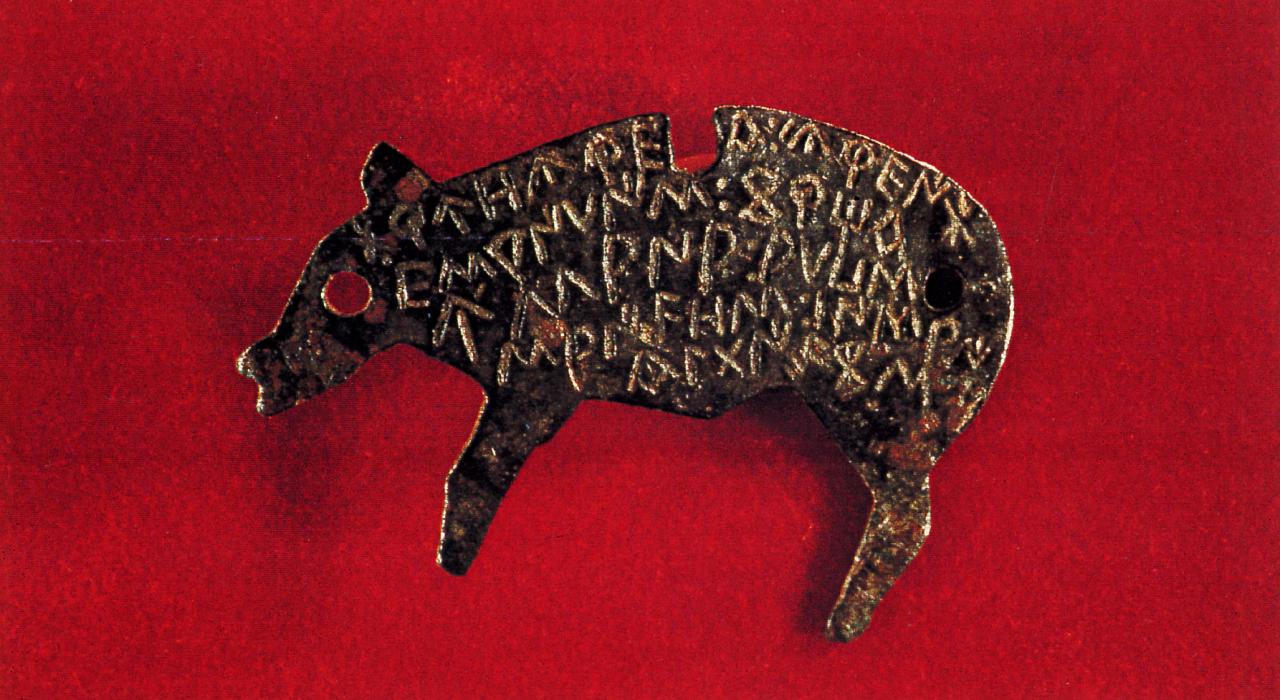 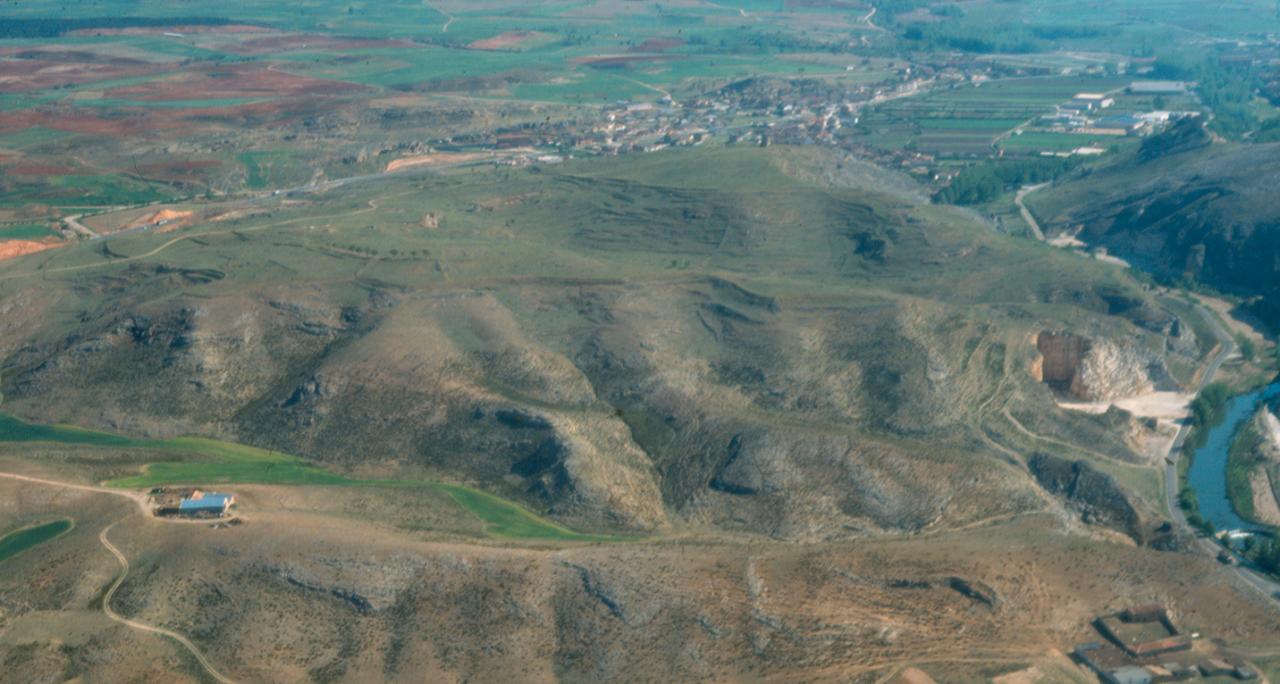 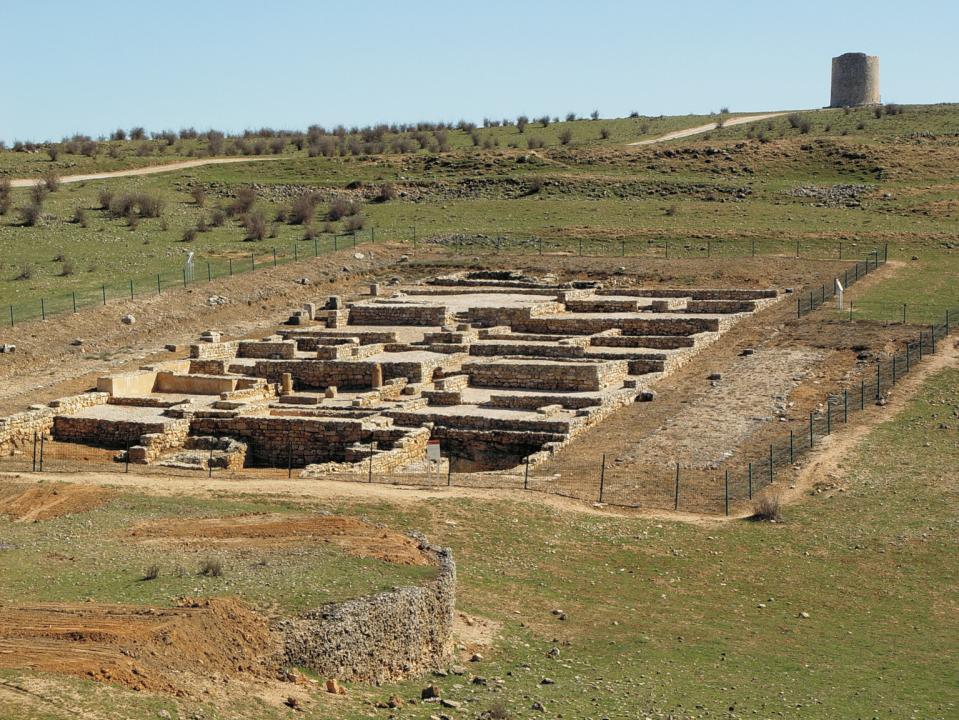 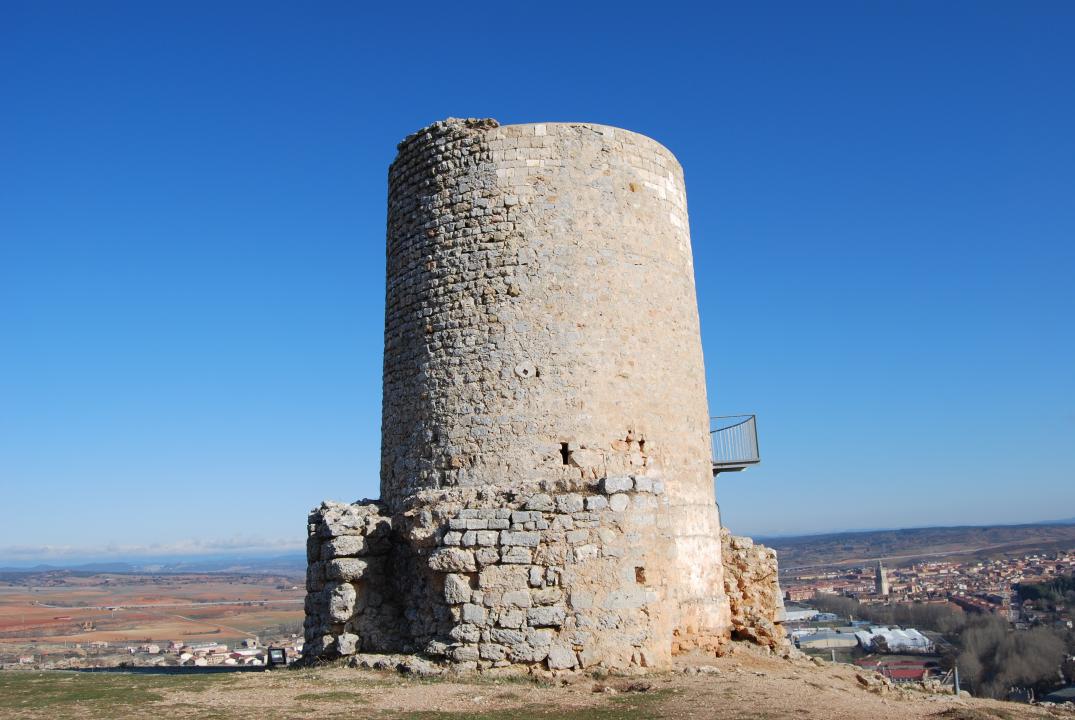 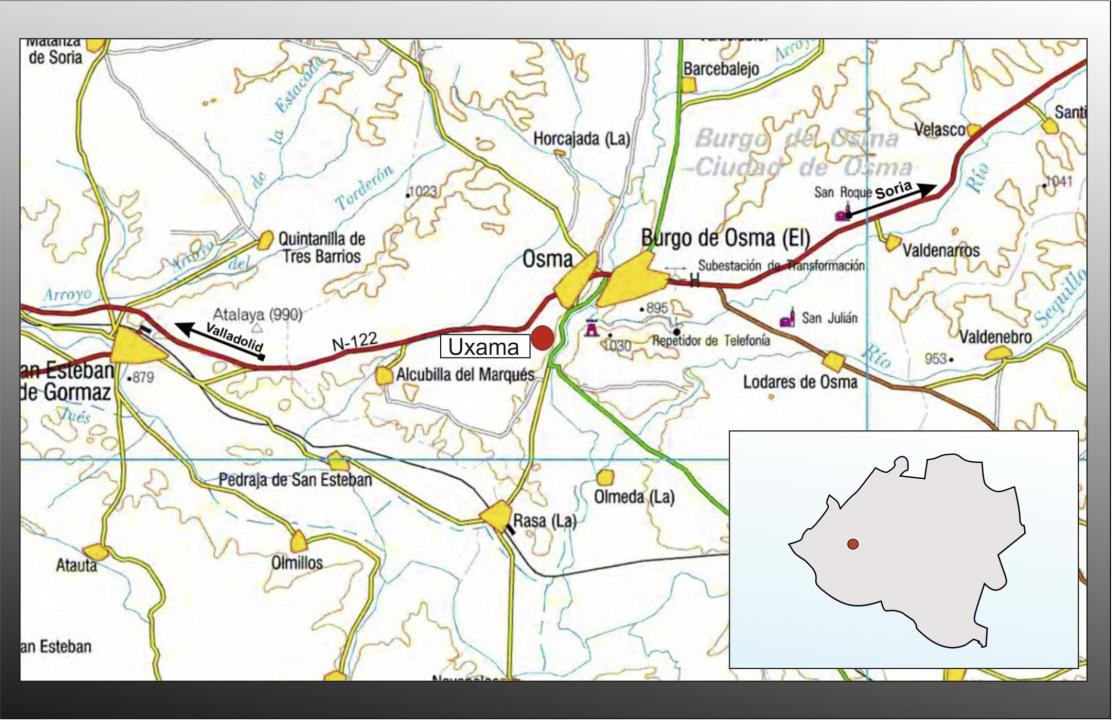 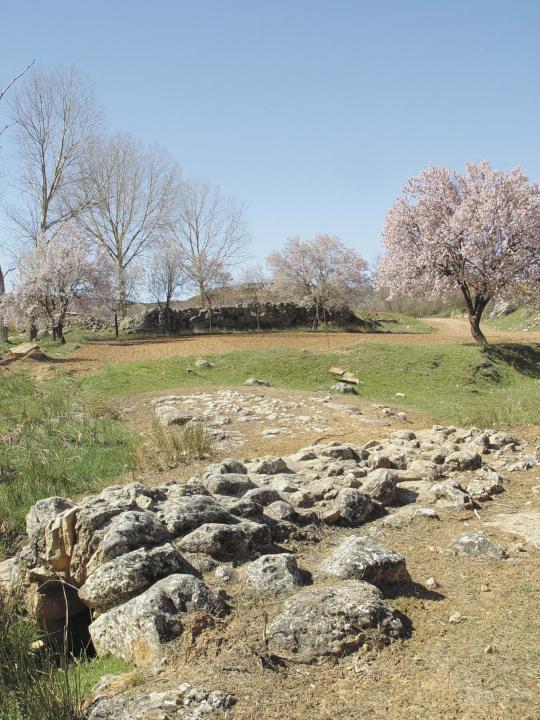 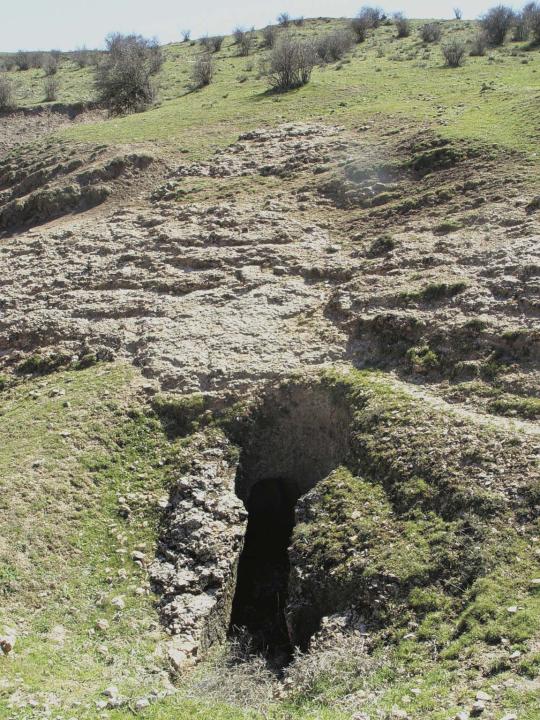 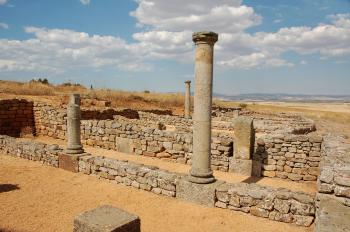 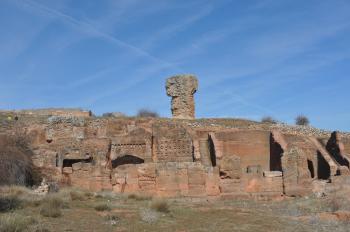 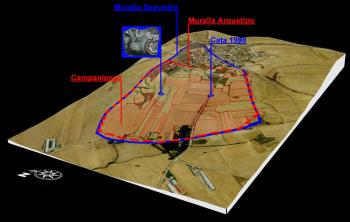