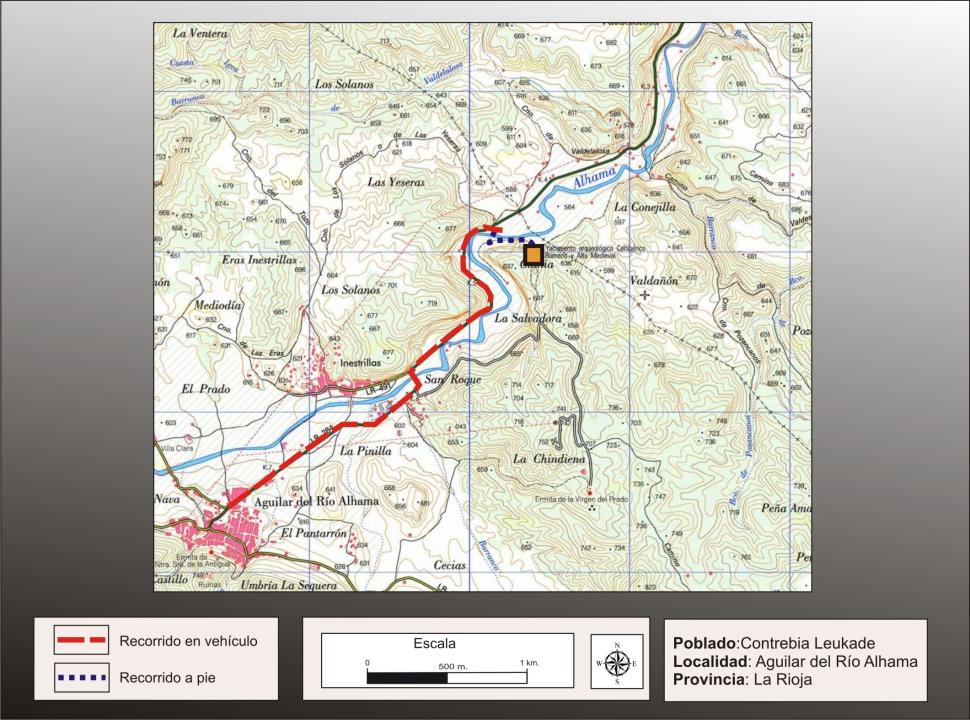 Well since Aguilar Alhama river or from Cervera del Rio Alhama in opposite directions, moving the LR-284 road to turn right (signposted), after traveling just over 1km, coming from Aguilar and left shortly before Aguilar reach, coming from Cervera.

This city is situated in the foothills of the Iberian, on the right bank of the river Alhama, in the municipality of Aguilar del Rio Alhama, parish of Inestrillas. His position, in between the valley of Alhama, allowed him to control one of the channels of communication between the Ebro valley and the plateau, between the old Graccurris (in the eras of San Martin de Alfaro), founded by T. Gracchus at the mouth of the river Alhama, as a base for the conquest of Upper Douro, home to the Numancia, that put up a stiff resistance.

The first news on this site belong to Traggia (1792), being abundant references along the s. XVIII and XIX, but was Taracena Blas, in the early twentieth century (1924) who addressed a scientific way, identified with the city of Contrebia Celtiberica Leukade, from the appointment of Tito Livio, excavations in 1934 and 1935 that allowed him to realize its phases of occupation, and to discover their defensive system and the organization of interior space.

The team led by Jose Antonio Hernandez Vera, University of Zaragoza, began work in 1989 continuing until the present time, having increased knowledge, we now have from this site, and arranged for the visit, as part of a plan, approved by the Directorate General of Culture, Government of La Rioja.

The name of the city and historical references

Celtic etymology is * Kom-TREB-ya, according to the authors whose meaning would be "meeting house ", "room together" or "live together" and Leukade has been associated with rdical * leuk-, ??meaning to shine, look, which also derive the Celtic god Lugus.

The city was conquered in 181 a. C., recovering after independence, to return to be conquered in 142 BC Later, according to Livy, took part in Sertoriana Wars (80-72 BC), being taken by Sertorius in the year 77 a. C.

The settlement of the First Iron Age

As background to the city celtiberica, settled in the western hilltop town of such a small Iron Age (VI-IV century BC), taking advantage of defensive capabilities provided the escarpment on the river and protecting the rest of the perimeter with a wall whose interior rectangular terraced houses carved into the rock.

This city sits between two small hills of varying heights and valley, which provide protection and a strong position to control their environment.

The well-defended area, is really impregnable the western side of the city, as it falls into vertical cut on the river Alhama. By contrast, the most accessible is the northeastern part that outputs the valley that runs between two hills.

It will be the second half of the fourth century C. when it expands the village and to strengthen their defense is built a large moat and a wall. Alongside these improvements defensive works were undertaken to provide potable water in the city. It was during this period when the settlement acquired its final extension, 12 surface has organized its walled and urban design.

The large pit excavated on the eastern side of the city celtiberica, reaches a length of approximately 700m. and has a width and depth of around 8m. This major project involved the removal of more than 40,000 cubic meters of stone were used in the construction of the wall, of which only a few traces remain.

The oldest remains of the wall is kept at the eastern end, at the highest point of the archaeological (in relation to the pit), as in the paintings are frequently shown standing redone and repairs at different times, yet , One can follow the entire route by the rock carvings made ??to secure your seat

The houses in the city follows the intricate topography of the site, having regard to the houses lined streets that follow the contours. The houses are rectangular, usually compartmentalized into several units arranged longitudinally: a hall that was used for crafts and household activities, a main room where the home stood slightly elevated above the floor and a store, sometimes large, often carved in natural rock.

The preservation of a significant portion of the elevation of the rock-cut walls and the weep holes where the beams fit, can recognize the existence of several plants in some homes. The floors were of beaten earth. In the lobby or main room, there is usually one or two tanks dug into the rock and removed the plaster covered with a wooden lid.

Abastecimientote To ensure permanent water and sufficient without relying on outside, people in developed Contrebia two works to have access to communicate inside the city and the Alhama river water level. One of these accesses, further south, was a channel that communicated with the so-called Cave of the Lakes, which preserves the input and the first few meters of travel.

The second of these works, it is a well dug in the rock, which is accessed from within the city, through a staircase carved and partly also vaulted. Initially this should be a tank that was supplied through a gutter, which led to him Alhama water, which could be cut from the outside in case of conflict. It is possible that this situation leads to remodeling, which was to deepen the whole, access stairs and cistern, until the water level of the river, to ensure supply without relying on outside.

After the change was the city recorded a period of renewed activity, then built the wall that closes the north side in place of the previous celtiberica destroyed.

The Roman wall runs parallel to the celtiberica in most of the route. Only in the extreme northwest, merge the two to fit on the river escarpment.

The stretch of wall, which closes the north side (the lowest, easy and immediate access to the river), differs from the rest of the wall both typological, technical and historical, as it has six semi-circular towers, two flanking the front door, and showing at its factory well carved sandstone blocks and ready. This building, set back several feet over the wall celtiberica, dating from the late I or II d. C.

It is located on the shaft and out of the valley through the center of the city. Two towers flank the double doors (hinges are preserved), that led to a long corridor with several pillars on the walls to hold probably covered items.

It seems clear that the most pervasive urban features that we see in the city corresponds largely to the Roman action, although she should weigh, as in the previous celtiberica city, the need to adjust the streets and terraces of houses contours that imposes sharp slopes of the hills. To this we must add the conditioning, which also included the excavation and exploitation of the rock to lay the buildings, heritage previous celtiberica.

However, it is likely that the Roman buildings, not only houses, but also public spaces, not documented yet, have, in proportion to its size, a larger area of wall construction and less use of the excavation in the rock, but this is the course that has marked the research action, in large measure.

The changes, in terms of monumentality and using the finest materials, they peek into the port of the north wall and the finding of mosaic pavements decorated using geometric, animal and plant schematic. It is likely that the foundation supports and carved into the rock, now see, at the time could be "hidden"by the monumentality and plasters of the Roman buildings and, once destroyed, have been more visible, showing only a small part of the buildings.

This place once again hosts a significant contingent of people, during the seventh century, which continued after the Islamic conquest until the late ninth century or the beginning of X, which will definitely leave when:

Emphasizes the use of the cave of a house as a place of burial Celtiberian, while the rest of the house remained covered by debris

On receipt of this center can be exposed archaeological remains, particularly ceramics Contrebia related, but this "presentation " is counterpoint discourse that takes place over five rooms dedicated to "The entrance to the City, "" The City "," The road, well and animistic nature, "" The road to the people "," People: the square of the stories. "

The exhibition is not intended to clarify or supplement the information in the visit to the city, but goes to another level, since what is intended in the course of the different areas is to evoke a city reinvented in a world full of symbolism Celtiberian , with which it wants to reflect their daily life, customs, military and strategic role and "especially"the dreams and feelings of those who built and inhabited. 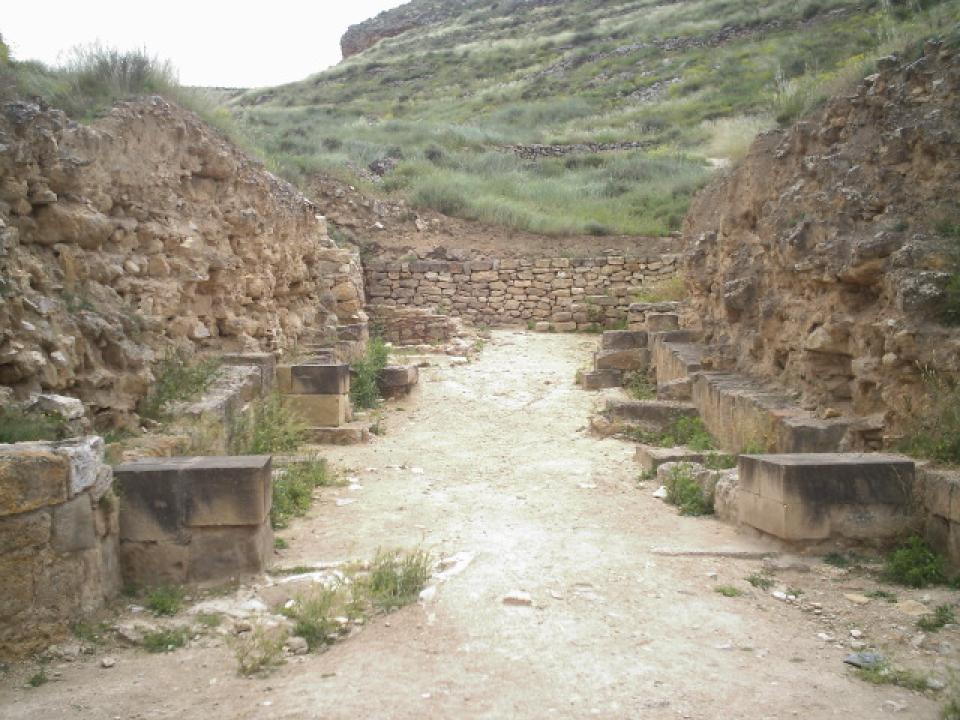 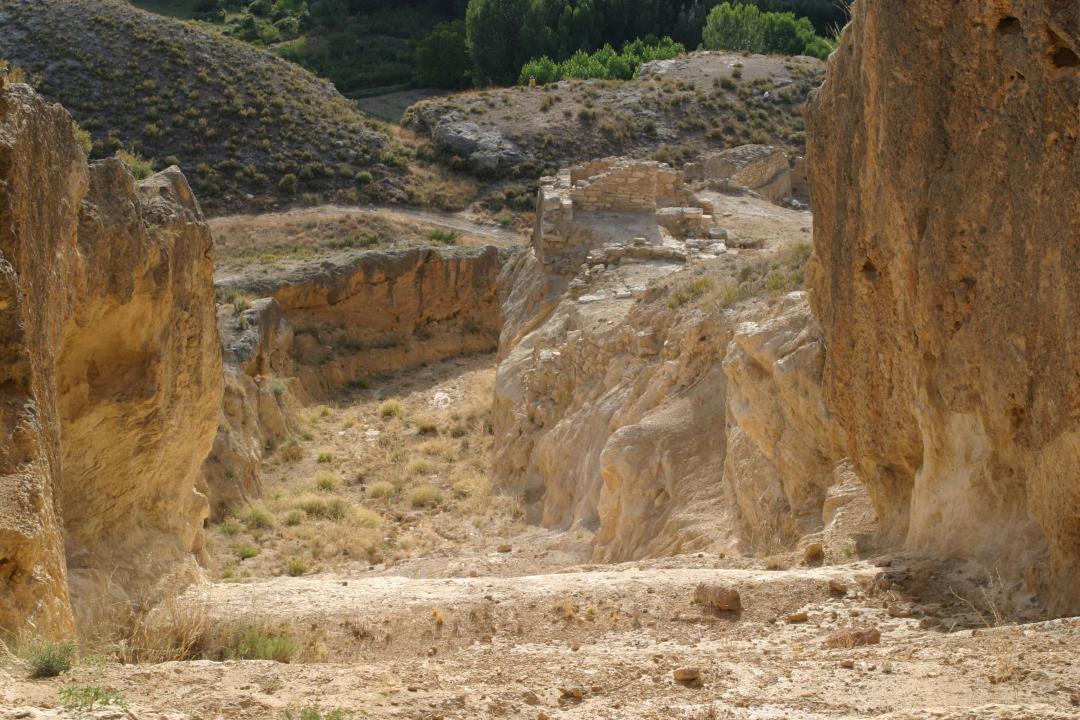 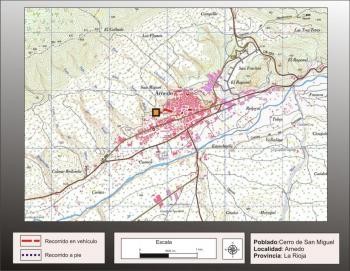