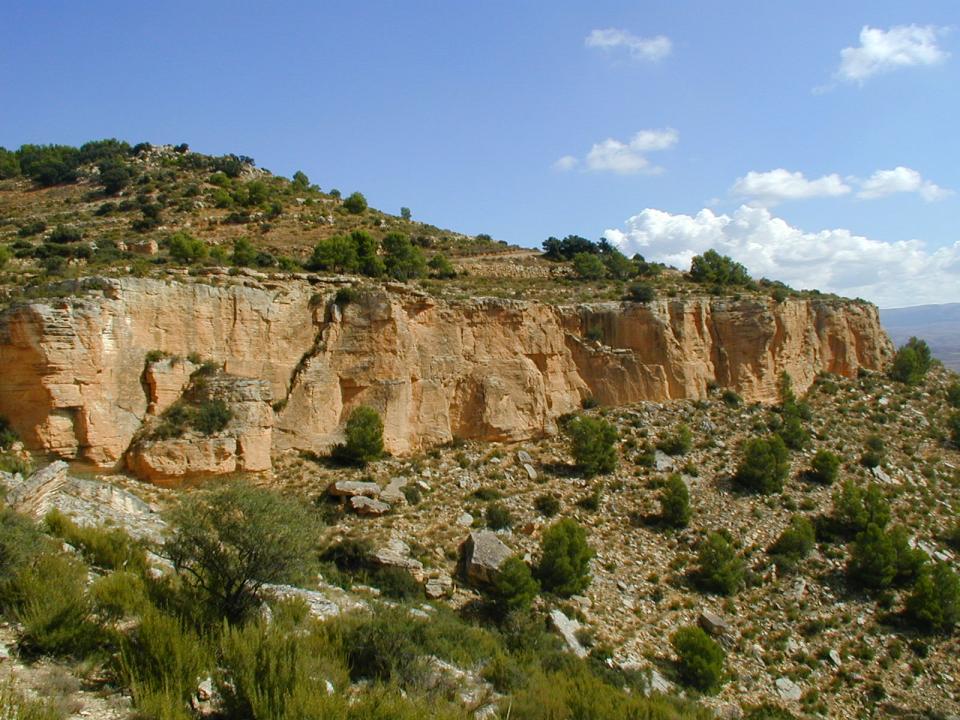 The texts of the Greco-Roman authors, representations of the ceramics and archaeological research can know some details about the gods and rites of the Celts.

One of the most complex to analyze within the cultural field is Celtiberian beliefs. The difficulty of studying the religious symbolic expressions derived mainly from the paucity of data provided, both classical and literary sources for the archaeological record.

Nevertheless, one of the areas best known is the gods. Assuming that the religion of the Celts was political in nature, can be said that his tomb was composed of various types of deities, most of them documented by indigenous theonyms present in epigraphic sources.

First, authorities must be seen panceltica sacred essence, that is, those whose cult was shared by all communities possessing a Celtic cultural substrate. Lug, the Matres and Epona, as epigraphic and iconographic analysis, appear to have wielded a strong position within this group. Lug, the most cited and important of all, is shown as a solar deity, bringing together in itself all the functions. For their part, were gods Epona Matres and female character, the former identified with the idea of fertility and the second to the protection of the deceased. Would complete this group of deities other, less common in the epigraphy and iconography, as Cernunnos, depicted with deer antlers on his head, a symbol of immortality and fertility, or the gods Sucellus, assimilated the wolf, and egrets, among others.

Second, be considered an integral part of the pantheon Celtiberian, a set of local gods associated with natural elements and accidents. These spaces were not identified with gods in itself, but with points of manifestation of divinity. Similarly, also had important astral deities of nature. The large number of representations of solar disc tetrasqueles Celtiberian painted ceramics and engravings on the foundations of homes on the advice, having all of them probably have a protective function of the dwelling and its occupants.

Ultimately, it is necessary to consider the group of deities assimilated Latino celtiberica the religious sphere as a result of cultural interaction between human contingents produced. So gods like Jupiter, Mars, Mercury, Hercules and Apollo were the subject of syncretic associations in large parts of Celtiberian.

Leaving aside the gods, another interesting aspect of the religion of the Celts is the ritual. Not many of them preserved evidence, but Numantian ceramics are one of the main pillars of their knowledge. For example, in one of the vessels there is a scene culling, featuring characters dressed in robes and conical headdress decorated. This same outfit, complete with animal masks, was probably used by the officiating in those rituals of divination nature referred by traditional sources, trying to predict events by reading the entrails, the flight of birds or eclipses.

There were rituals of propitiatory nature of contact with the divine and the symbolic cutting of hands or head. This practice, documented in other places such as Gaul seems to have taken on the Iberian Peninsula an apotropaic purpose. They had their heads hanging from their horses or exhibited as trophies in their homes to ward off evil influences, practices relating to the Celtic belief that the head is the essence of the human person, which must be related to the frequency of such representations in the Celtic world.

Prominent were the rituals associated with fire, possibly related to the sun, as the summer solstice festivals of purification celebrated career, struggles, sacrifices and dances. Often the representation of men with horse heads with big horns sheathed in arms or bull masks that indicate religious rituals associated with these animals.

The sun, moon and their cycles were suggestive of death and resurrection, as the night gave birth to the day. In addition, fish and birds, along the horses were closely related to the underworld and that, through its medium, air and water, transporting souls to the unearthly worlds

The Celts are not locked to their gods in enclosures constructed, developed their worship outdoors. The Celtic word that means par excellence to the shrine is the Nemeton, where communication occurs between men and gods, which can be a clearing in the forest atop a mountain or a high (Peñalba of Villastar, Teruel ), sources, rivers or a cave, also there are references to domestic shrines. The most significant qualities of the deities were represented Celtiberian or assimilated to those animals that had, noting the horse or bull.

The writers of antiquity have transmitted a double burial ritual among Celtiberos, as Silius Italico (3.340 to 343),

"The Celts considered an honor to die in combat and a crime to burn the corpse of a warrior and died, they believe that their soul back to the gods of heaven to devour the body lying vulture "and, according to Aelian (10:22), referring to vacceos" ... are buried in the fire to die of disease ..., but those who killed in the war ... throw them to the vultures, they consider as sacred animals. "

-The ritual of the exhibition of corpses

The second ritual, intended for those who died in battle, was to lay their bodies in certain places, to be eaten by the vultures, seen as intermediaries (psychopomps) between the human world and the gods, as the naked while his body her spirit transported directly to the celestial deity. This ritual was considered purer than incineration, and avoiding contact with the ground.

-The ritual of incineration

The first was the usual ritual, was the cremation of the body with his outfit on a funeral pyre or "ustrinum." After the cremation, was collected, previously selected, the ashes and bones of the deceased, engaging them in a pit or above in a ceramic urn or vase. Next to it was deposited to the outfit or personal belongings of the deceased, consisting of weapons, decorative items and utensils.

The tombs, grouped in cemeteries or cemeteries abroad could be marked with a stone or a shell or wake tumulus.

Characteristic of the tombs Celtiberian is intentionally disabling personal belongings or furnishings of the deceased. The weapons, tools, or ornaments placed in the tombs appear bent and useless intentionally, with this practice was to avoid the separation of the deceased personal items through his "death ritual", so his spirit was with the deceased to Beyond, as exponents of their own identity.

The existence in some graves, skeletal remains of young animals, lamb, foal, has been interpreted as the portion of the funeral feast of meat belonging to the deceased. To a lesser extent, have been found in the necropolis Celtiberian symbolic burial or cenotaphs, where animals replace the body of the deceased when this was impossible to recover.

The study of the necropolis Celtiberian incineration allows us to understand the social organization and assess the status of the deceased, through the structure of the tomb, the characteristics of the trousseau, the skeletal remains of the dead and their location in the whole the cemetery.

The study of the archaeological evidence allows us to approach the symbolic language established between living and dead, through the funeral ritual. It is possible to evaluate the wealth of the tombs, valuing the total number of objects or object types, the weight of the metal and the complexity of the funeral home.

Along with the ashes and remains of human bones, was deposited outfit composed of objects or their parts are not perishable for fire resistance, as well as portions of meat offerings funeral banquet for the deceased.

The analysis of human skeletal remains provides information about the diet of each individual and to determine whether there were differences in food for reasons of social status or gender, as well as foreign origin.

Finally is documented only within the settlements, a third type of funerary ritual that affected the children. Involved the burial of the youngest, who died prematurely, under the floor of the houses. This act seems to find its motivation in the fact that the children were not considered part of the community to come of age, previously belonged only to the family. 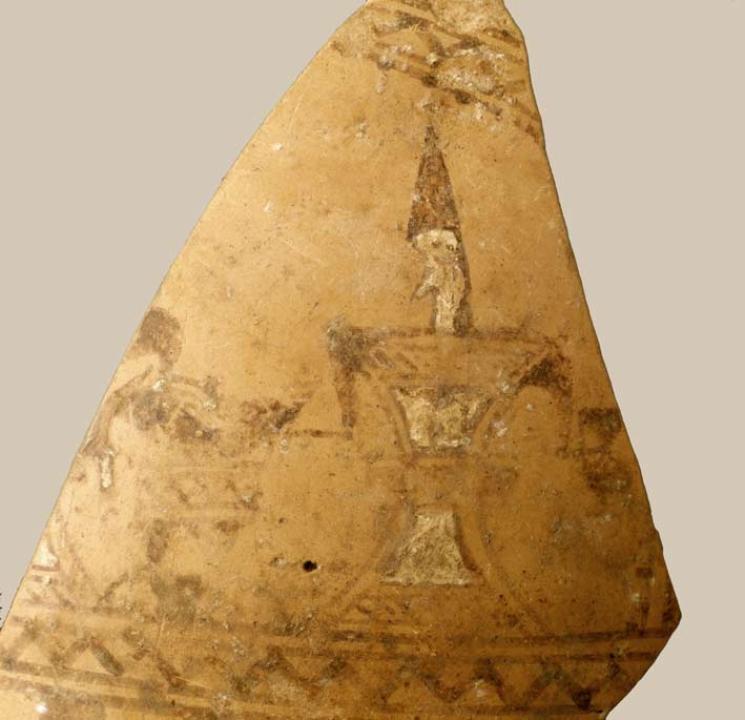 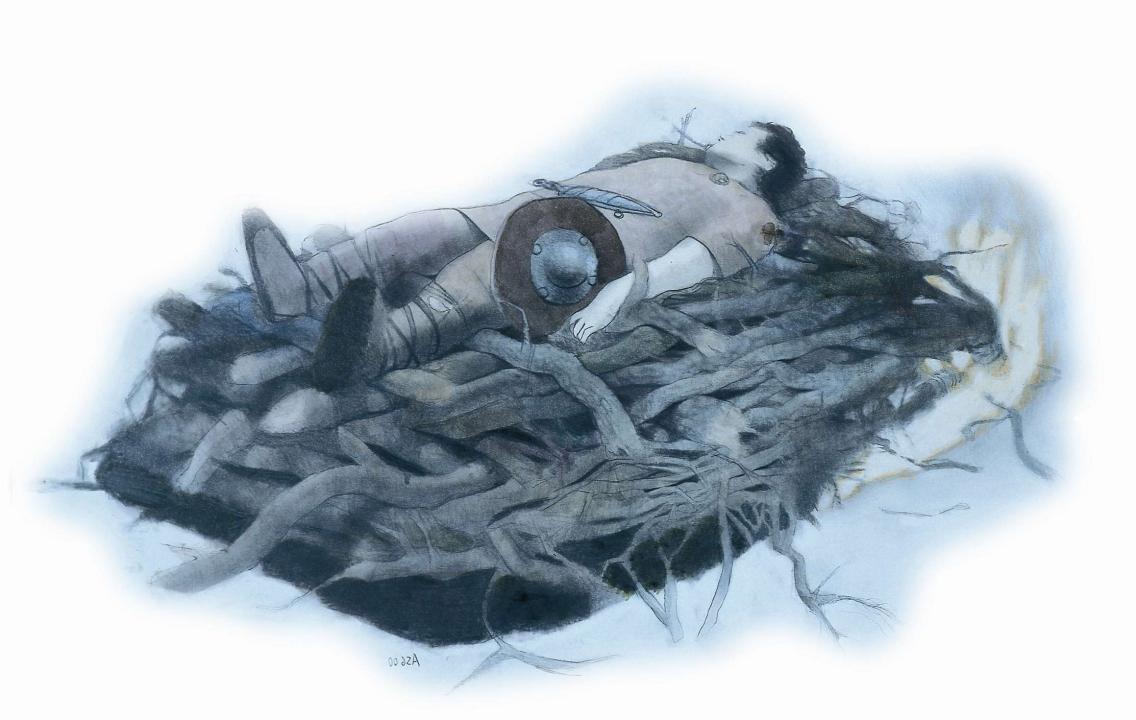 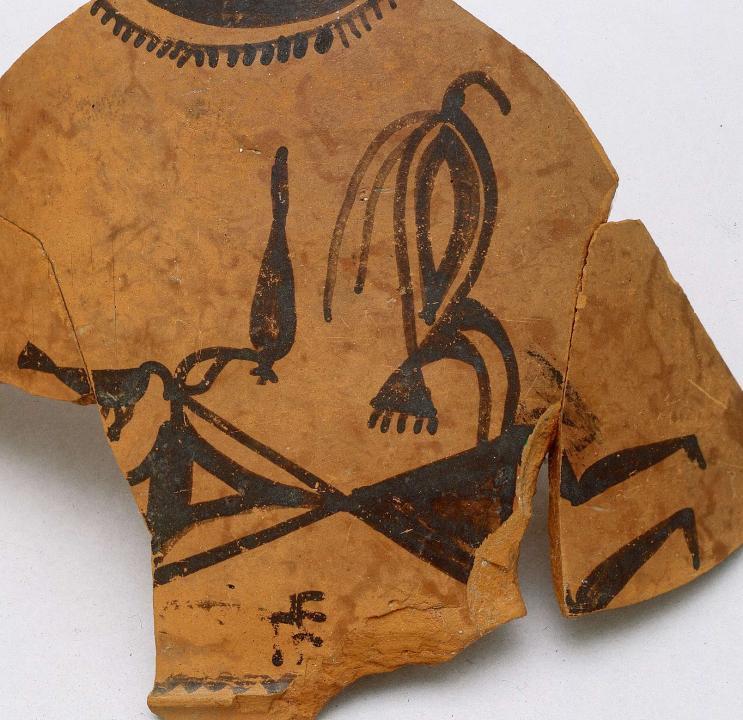 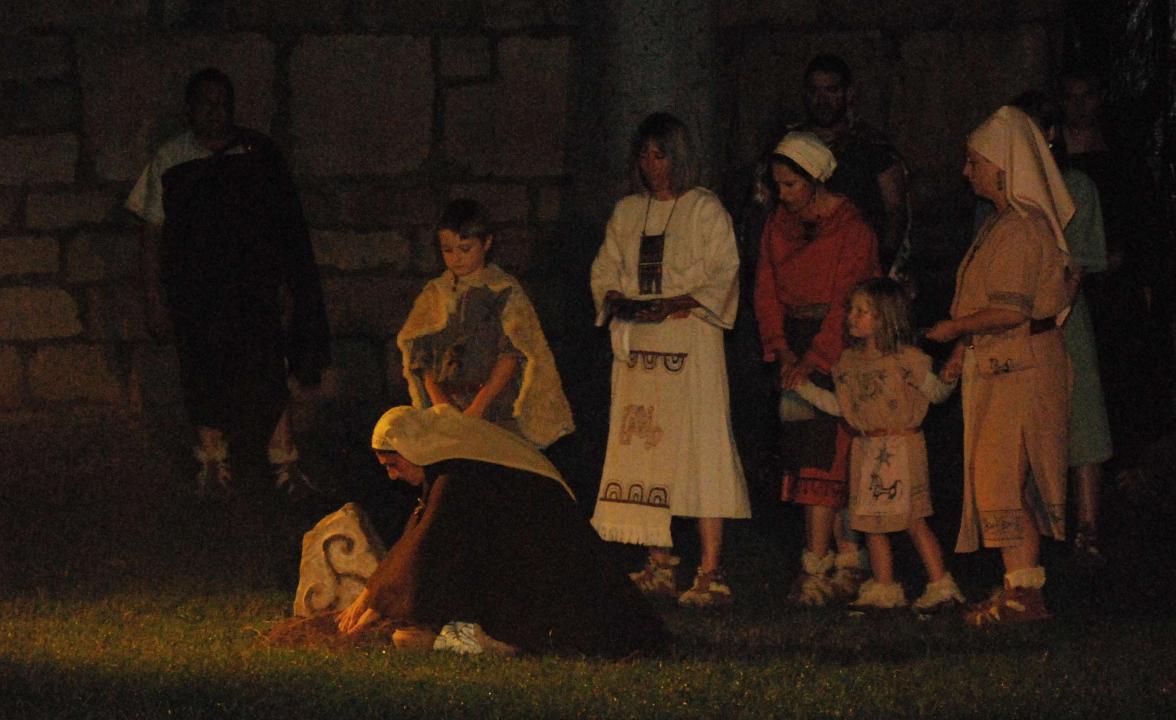 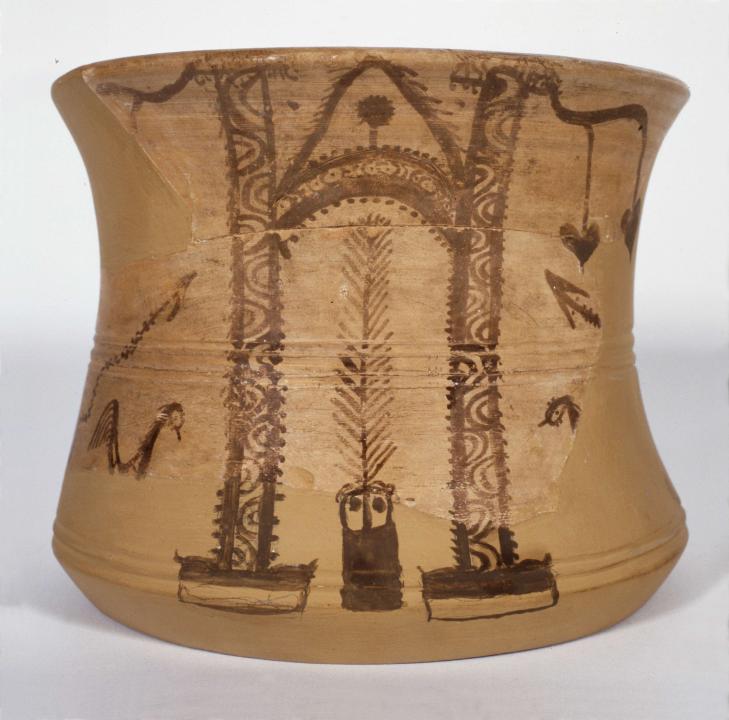 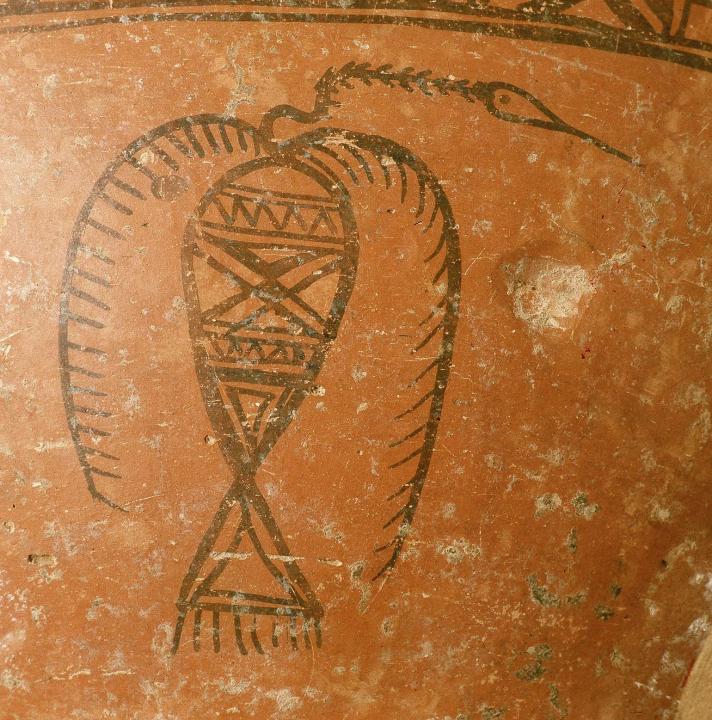