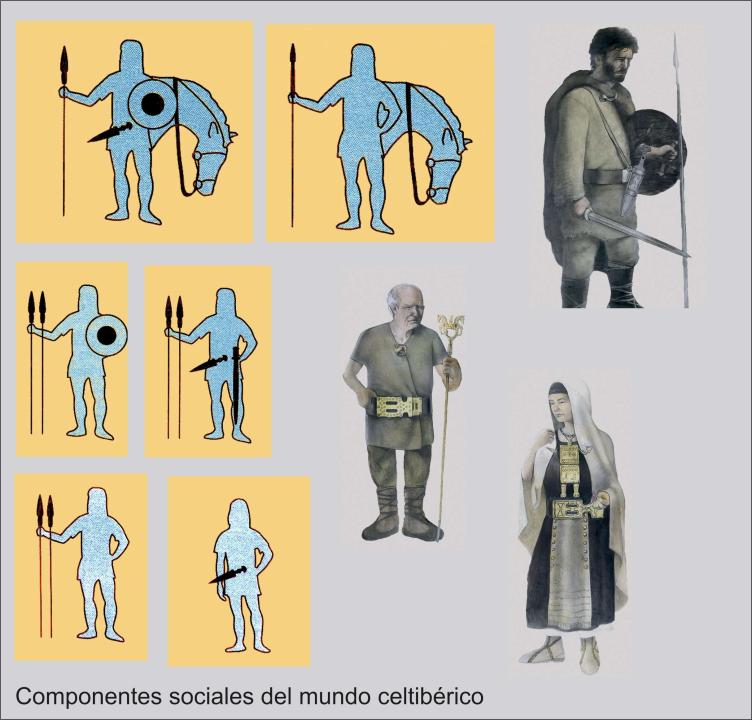 Celtiberica society, over the centuries, was adopting a more hierarchical structure. Initially, it was characterized by communities linked by close ties of kinship, with collective use of land. But since V century BCE is a marked trend toward greater social complexity. This prioritization process will result in the abandonment of earlier kinship structures, establishing new relations of personal dependence, based on private ownership of land, especially from the fourth century BC, ending in the development of the city

From the third century C. celtiberizacion process appears to be enhanced through the expansion of horse fibulae of witnessing the expansion of equestrian class structure based on patronage to control increasingly larger territory, coinciding with other elements such as the suffixes in-briga city and other anthroponyms Celtiberian and gentile in the genitive plural and hospitality tesserae and even some Celtic deities. This expansion occurred in the areas of pastoral environment with a substrate similar socioeconomic and ethnic-cultural zones of the Plateau and the northern peninsula.

Prior to the arrival of the Romans, the parental organization celtiberica, with the extension of agriculture, had begun to crack and modify their bases, showing social differences and losing their status as equal, extending private ownership and initiating urban development, establishing new relationships of dependence. Social complexity was necessary to increase skilled labor, developed by artists and artisans of various materials: goldsmiths, bronze-smith, blacksmiths, potters, covering the needs and manufactured with great skill and unique items and clothes that emphasized the prestige of these elites.

Initially, the social organization was based on the "People" and "gentilitates", ie, in tribes and clans. The basic unit was the "gentilitates" which were based on collective ownership of land or territory in which they settled, and all of its members, who were united by ties of blood kinship or established through a common ancestor were governed by a set of duties, rights, and religious practices forced all. This form of organization was likewise reflected in the "nations" or tribes, higher organizations, which in turn could be grouped or federate in what is historically known peoples.

At the top of this society was a warrior elite centralized political power, giving the rest of the population protection against external attacks. The privileged status of the members of this group, attached to not acquired in life, allowed them to exercise equal relationships through institutions such as the "hospitium" relationship framework at the level of equality, but that evolved into the "customer" , establishing reciprocal relations but asymmetrical between the employer and its customers or "devotio", an extreme and religious content of the customer in which the warrior could even get to give life to protect his boss. The tombs of the rich treasure aristocratic regalia group consisting of weapons and decorative items, concerning their status. Alongside men and women also appear to a lesser extent children.

However, although the wealth was livestock, livelihood depended on working the land. It is possible, as indicated by Strabo for the Spaniard, who were the women who were engaged in land and house, while men engaged in war, be they who inherited the house and land and the husband receiving dowry. The girls chose husbands among those brave warriors. Women are willing to participate in armed conflicts fought like men.

The Roman conquest and textual information

Be with the Roman conquest when the classical texts provide referrals and information to approach the social organization of the world Celtiberian, but this documentation corresponds to the moment of maximum development, when the Culture Celtiberica was organized in cities. Thus, the political and legal reference for Celtiberian was its urban context of origin, understood with the territory it controls and gives it meaning, which is distributed rural population, split into smaller entities or villages. This actually refers Appian, when he says that Scipio gave Numancia and territory to those Indians who had helped make the city "(Iber., 98).-Two major urban institutions

This documentation identifies two main institutions that had a specific weight in the government of the city, as were the Assembly of elders (seniors) and the Assembly of Youth (iuniores). Institutional bodies appear well reflected in an episode of the siege of Scipio, when the adamant Retogenes goes to the city of Numancia Luti for help, before its imminent fall. Young people in this enclave, according to Appian, "declared by the Numancia and pushed the city to succor them, but elders warned Scipio." Yet another episode suggests that Arevaci despised his enemies, and therefore "the crowd gathered at a public meeting decided the war against the Romans" (Iber., 94).

Luti Here you can see the political influence that had Juventus, and pressed it to the House of town for succor to Numancia. In this context we must also understand that the five emissaries Numancia charge of negotiating with Scipio, to head to the front Avars, were killed by the people, to accept a dishonorable peace, as was to be delivered without arms. Therefore, the Roman texts, but from a foreign and remote in time, we report the existence in the cities Celtiberian two segments of society, at times, confronted by what is good for the community.

These references indicate a complex organization, which reveals the existence of an elite defined by its nobility, courage and wealth, which would be represented in the Assembly on Aging (seniors), who held more power of decision. Another popular type meeting in which participated the armed people, who appointed the military and decided on matters affecting the community. The composition of these two assemblies refer to the existence in the cities Celtiberian age groups, including seniors and iuventus ie, is reflecting a non-parental social content, with frequent clashes between them, to understand differently, what was best for the city.

Numancia mentioned in the existence of judges on the occasion of the disaster suffered by the Roman army Mancino (137 BC) and initiated peace talks, the quaestor Tiberius Gracchus to the judges about the city to reimburse him the stone tablets and management accounts, which were part of the booty taken by the Numancia.

The weight of the military in society is shown celtiberica the importance of the war to gain prestige and wealth, agonistic ethics related to it, and in single combat, as reflected in the iconography of ceramic representations. In this context, there is absence of leaders or military leaders, elected by the assembly, to deal with certain situations or military needs, recognized for their courage, military ability, and even some religious connection. If the head is Expensive, "famous for its value, chosen jointly by the Numancia and segedenses to make war against the army of Nobilior. On the death of Expensive Arevaci Numancia gathered in Ambon and Leucon choose. Then he will head Litennon make peace with Marcelo, subsequently summon and Megara and in time of siege of Scipio, to Retogenes, Caraunios nickname "the bravest of Numancia."

On different occasions, mentioned the figure of bequests and sent messengers to negotiate peace. A herald covered in wolf's clothing as a sign of peace is sent, in the episodes narrated in the year 152 BC, by nertobrigenses Marcelo, who demanded that the agreement was signed by all the Celts, so belos cities, Titos and legacies Arevaci sent to Rome for these negotiations.

Sometimes the texts mention servants or slaves, "have been related to prisoners of war. However, people know the existence of prominent citizens, serving through the episode on the Appian describes Retogenes audacity, which gets over the fence of Scipio, accompanied by five clients and five "servants" to go for help Arevacos the cities. Client relationship, asymmetric, between individuals of high rank and lower social groups is well documented in the written references to the Celts. The existence of hierarchy in the organization of Numancia and cities can deduct on breed is also referred to another passage Retogenes protruding "among all citizens for their nobility, wealth and honor" and ignited "the most beautiful district of the city”.