The name of the city

Sego-briga, derived from two source terms Celtiberian: sego-, which would win (this in other cities such as Segovia, Segeda and Segontia) and the suffix-briga, which would mean city, fortress, so its interpretation might be "victorious city".

Frontino is the author refers to a time when the city's oldest, when he tells Viriato Lusitanian attacks against Segobriga by his alliance with the Romans in 146 BC At a later time corresponding to the quotation from Strabo places it in the Celtiberia, referring to the environment and Segobriga Bilbilis Metellus fought and Sertorius.

On the other hand Pliny, referring to the Celtiberia, Segobriga referred to as "caput Celtiberiae, but at one point as the Roman ciuadad because it indicates that the convent was stipendiary Caesaraugustano.

This author also mentioned the exploitation of lapis specularis, [] a variety of highly prized translucent gypsum for the manufacture of window glass and it would be for a long time part of the economy of Segobriga. Pliny says that "the most translucent of this stone is obtained in the Hispania Citerior, near the city of Segobriga and extracted from deep wells. " One of these mines can be seen in the nearby town of Carrascosa del Campo.

Coins are known to leyendaSekobirikes, silver (denarius) and bronze (aces and semis) with male bust on the obverse and rider spear, on the reverse, minted in the last third of the second century C., which have been linked with this city.

Is called a tessera hospitalis, recoated Segobriga Area in the nineteenth century, shaped like a bull's head, which has two text lines Celtiberian in repeating the name Sekobirikea, which is to document that the name of the city ??is present in this area.

Problems situate on the hill celtiberica Segobriga Head of Greek

Initially, ranked Segobriga in Segovia, on the criterion of maintaining ecclesiastical ecclesiastical divisions, but A. Schulten and Bosch Gimpera correctly placed it in the early s. XX, the Head of the Greek mountain in Saelices (Cuenca), which houses the Roman Segobriga.

But, for different authors, quotations from Frontinus and Strabo, the city of celtiberica time, did not seem to correspond with that of Cuenca, which is added the lack of archaeological remains in the closed head of the Greek, since most are former mid-century I a. C.

"Other authors maintain that this is the Segobriga celtiberica, based on the inscripcipcion of Sekobirikea, which suggests the existence in the area of an indigenous community with the same name, which would be consistent also with the Roman policy of displacing the indigenous towns new settlements close, keeping the centralization that had over the territory.

Access from the A3 motorway, which connects Madrid with Valencia. It should take exit 103, this road that indicates the Park and head south on the highway CM 310 in the direction of Villamayor de Santiago, following the signs established.

The Roman ruins of this city are mentioned in different writings of the Middle Ages. Throughout the eighteenth and nineteenth century were carried out excavations and looting sometimes intentional and other unscientific by excavators. The beginning of scientific work were made ??by Professor Martin Almagro Basch, who was the instigator, since 1962, coordinating with the consolidation and dissemination, work continued by M. Almagro Gorbea and now by the Park Director Arqueologioco JM Abascal, University of Alicante.

This site is part of the Archaeological Park Plan currently promoted by the Directorate General of Heritage and Museums, the Ministry of Culture, the Junta de Comunidades de Castilla-La Mancha.

On the hill known as the Head of Greek, which houses the Roman city of Segobriga, has an altitude of 875M on sea level. Its highest point is 75m above the river that surrounds Ciguela the south, like a moat, which is its most rugged and rocky slopes are somewhat less east and west sides and more accessible to the north. The city settled on the west side, also extending the zone level.

Features of the Roman city

The city's urban development seems to begin in mid-century BC, when it starts printing money and carried out the construction of a portion of the wall, which will be completed in the Augustan era.

In times of this emperor, around 12 a. C., city ceased to be mercenaries, paying tribute to Rome, and became municipium, city ruled by Roman citizens. Throughout the century and the beginning of the Second City status grew significantly, leading to its booming economy and a large monumental building program gave the city an urban look similar to other Roman cities. 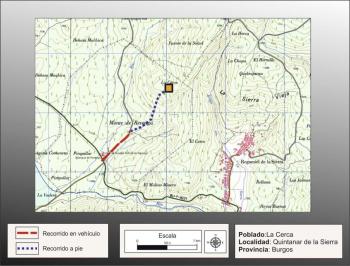